by Cherise Threewitt Jan 8, 2019
A staghorn coral being grown in a National Oceanic and Atmospheric Association (NOAA) coral tree for eventual transplantation into the ocean. NOAA

Coral reefs are being killed off faster than they can regenerate, due to factors such as pollution, overfishing and the rising ocean temperatures associated with global warming. According to Coral Vita, a coral farming and restoration organization based in Freeport, Grand Bahama, more than 30 percent of the world's reefs have died in the past few decades and scientists predict 75 percent of those left will die by 2050.

Reefs provide a habitat for fish and wildlife, which promotes a diverse ecosystem and provides a source of food for people. Coral reefs also provide jobs in the recreation, tourism (think snorkeling and scuba diving) and fishing industries, while protecting shorelines from erosion and storm damage. The ecosystem of a coral reef also can provide renewable resources for medical research and in the development of such things as painkillers and bone graft methods.

But the world's coral reefs are in decline and farming may provide a solution. Coral farming is the practice of collecting coral pieces from the ocean, growing them in aquariums and then returning them to the wild. Coral farms can be established and maintained at a low cost, and controlling growing conditions helps the coral grow more quickly. Some farms are actually installed in the ocean, making them less expensive to run, while land-based farms allow scientists to work under optimal conditions and learn more about how to slow or prevent coral loss and decay.

Florida-based Mote Marine Laboratory and Aquarium is credited with the discovery that coral grows faster when it's cut or broken, because of its natural self-healing response to injury. Director Dr. David Vaughn developed the quick-grow technique by accident in 2006 after breaking some coral in a tank, but he didn't start using the technique on a large scale until 2011. The process of fragmenting coral has been used since at least the 1960s, but experts say Mote's project is the most promising attempt to mass-produce reef-building corals for transplant onto dead or dying reefs so far.

Depending on the species, the corals are grown on tree-like structures constructed from PVC pipe or frames made from cement and plaster. A wet saw is used to cut the coral into 1 centimeter-wide (0.4 inch-wide) cubes, a process called "microfragmenting." Some corals are microfragmented and put through the growth process again instead of being transplanted. After being transplanted in groups, the coral eventually fuses together.

The Mote team experiments with different temperatures and acidity levels in their tanks to cultivate coral better suited to warmer temperatures and rising acidity in the ocean. Once the coral is ready to be transplanted, the team searches for dying coral of the same species. The new coral is left to fade in color for 30 days before being transplanted, because the bright colors of new coral may inspire fish to be too aggressive with it. The new coral is attached to the old coral with epoxy and then the team waits for the new growth to begin.

A similar project, reported in the September 28, 2018 issue of ScienceDaily, was completed in Indonesia from 2013 to 2015, as part of a study from the University of California, Davis and Mars Symbioscience. Researchers supplemented a coral reef with small hexagonal structures that supported new coral fragments to try to encourage fusing and new growth. This technique increased live coral by about 60 percent at a cost of about $25 per square meter, or roughly 11 square feet.

Though coral restoration efforts have been successful so far, it's important to remember that lab-grown coral is just a bandage on the real problem. This isn't a cure for the problems caused by global warming, researchers caution, but it's a method of buying time because there isn't enough time to wait for coral to replenish itself naturally. A cupcake-sized piece of coral would normally take about two years to grow, but with this method, it grows in about four months. Wild coral takes 25 to 75 years to reach sexual maturity, but the lab method reduces that timeframe to just three years. The exact rate of reproduction depends on the coral species.

Now That's Interesting
Dr. David Vaughan, the director at Mote Tropical Research Laboratory, told PBS in 2015 that a coral structure the size of a car could be anywhere from 500 to 1,000 years old. According to David Gross, a coral biologist, Vaughan's goal is to plant 1 million corals before he retires. 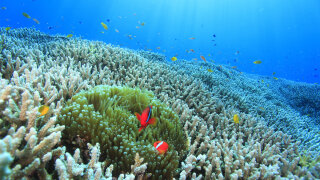 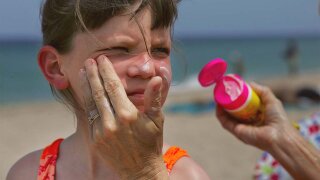 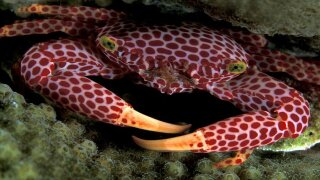