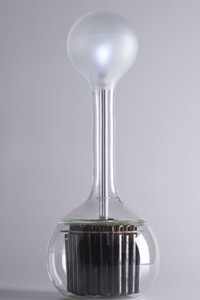 Dutch product designer Marieke Staps created the so-called Soil Lamp. And while the design itself is new, it incorporates a rather old concept, sometimes referred to as an "Earth battery."

In 1841, inventor Alexander Bain demonstrated the ability of plain old dirt to generate electricity. He placed two pieces of metal in the ground -- one copper, one zinc -- about 3.2 feet (1 meter) apart, with a wire circuit connecting them. The result was electricity, about 1 volt's worth -- enough to power the clock he hooked up to the circuit [source: EE].

This dirt setup is similar to the common Daniell-cell battery, which dates back to the 1830s. The Daniell cell has two parts: copper (the cathode) suspended in copper-sulfate solution, and zinc (the anode) suspended in zinc sulfate solution. These solutions are electrolytes -- liquids with ions in them. Electrolytes facilitate the exchange of electrons between the zinc and copper, generating and then channeling an electrical current. An Earth battery -- and a potato battery or a lemon battery, for that matter -- is essentially doing the same thing as a Daniell cell, albeit less efficiently. Instead of using zinc and copper sulfates as electrolytes, the Earth battery uses dirt.

When you place a copper electrode and a zinc electrode in a container of mud (it has to be wet), the two metals start reacting, because zinc tends to lose electrons more easily then copper and because dirt contains ions. Wetting the dirt turns it into a true electrolyte "solution." So the electrodes start exchanging electrons, just like in a standard battery.

If the electrodes were touching, they would just create a lot of heat while they react. But since they're separated by soil, the free electrons, in order to move between the unequally charged metals, have to travel across the wire that connects the two metals. Connect an LED to that completed circuit, and you've got yourself a Soil Lamp.

The process won't continue forever -- eventually the soil will break down because the dirt becomes depleted of its electrolyte qualities. Replacing the soil would restart the process, though.

Staps' Soil Lamp is a design concept -- it isn't on the market (although you could probably create your own -- just replace "potato" with "container of mud" in a potato-lamp experiment).

A much newer approach to the Earth battery uses soil as a more active player in producing electricity. In the case of the microbial fuel cell, it's what's in the dirt that counts.