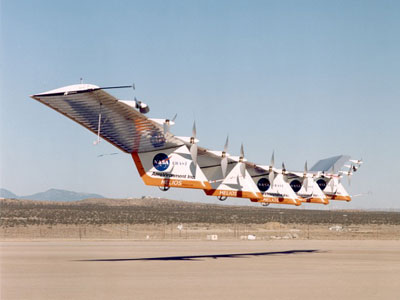 It's hard to imagine paying $20 million for a plane as thin as a wafer, but that's about what solar airplanes cost.
NASA Dryden Flight Research Center Photo Collection/Tom Tschida

Many researchers say it's useful to park a solar aircraft in the sky. It can hover over a spot, carrying cameras or other sensors. In the stratosphere, it can sample gases near the ozone layer. It can also watch forest fires or track hurricanes on the ground.

For the military, solar airplanes can help with reconnaissance. Like spy planes, they fly high, which makes them stealthy. But while spy planes must fly over and return, solar airplanes are unblinking eyes. They can take uninterrupted photos or videos for years. "When an event happens, they can study everything that led up to it," says Del Frate. For law enforcement, they're good for border and port patrol.

It's true satellites can perform some of these tasks. But solar airplanes see more detail on the ground with less expensive cameras because they're closer to the action. They're also less expensive to build and launch. While satellites are hard to move once they're in orbit, solar airplanes are easily moved. It's also easier to bring solar planes down for maintenance.

Stratospheric jets, like the F-22A Raptor and U-2 spy planes, also emit exhaust. While they emit it into the stratosphere, where gases persist longer than in our troposphere below, their contribution to air pollution, ozone depletion and global warming hasn't been measured thoroughly. Solar airplanes that can accelerate and maneuver like these planes are many years off. So at this time, it's not practical to talk about solar planes being environmentally friendly alternatives to other planes. Still, they are clean vehicles for their current applications.

"Someone once asked me, what about birds? Are you worried about hitting a bird?," recalls John Del Frate. "I had to laugh. A bird can out-fly one of these things. A bird could make a nest on one of these things while it's flying!" Because it's hard to move a solar plane out of the way, pilots work with the FAA to plan flights away from other planes. Luckily, very few planes fly at 65,000 feet (20 kilometers).