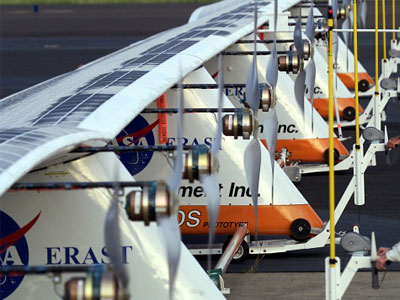 A solar plane's flight starts with checks. Check the battery -- it should be charged. Check the ground winds. They shouldn't exceed about 10 miles per hour (16 kilometers per hour), or else the plane could crash on the runway. Check for turbulence in the air because the plane will have to ascend through the turbulent layers. Billows in the clouds are a bad sign. "Wind is your enemy," says Del Frate.

Morning is best for takeoff, when the sun is overhead and there are ample hours of sunlight left in the day. As a runway, you'll need a circle a little more than three football fields across, which is 10 times shorter than an average airport runway. Next, you angle the plane for takeoff, using that circle. You point the plane so the wind blows head-on, but never across it. Crosswinds spell destruction for most solar planes because they can throw the plane in unwanted directions.

When the propellers are online, a combination of battery power and solar energy can start them spinning, and the plane is ready to roll (or be hand-tossed into the air). "The plane takes off at bicycle speeds," says Del Frate, because takeoff is typically done on solar power. As a pilot, usually on the ground, you avoid shadows and steer for maximum sun to preserve power in the battery.

The plane ascends slowly. You make it ascend by speeding its central propellers, tilting it up. By 35,000 feet (10.6 kilometers) or so, you've hit the jet stream. Hold on. In this turbulent layer of the sky, planes like NASA's Helios can bend, from flat to a dramatic "U," with the wind. If the plane didn't bend, the wind could rip it apart. The plane can't stay here, where 747s cruise, because if turbulent wind doesn't kill it, the jet stream will carry it away.

Above the jet stream, dodge the puffy clouds; they block the sun. Turning is as easy as speeding the propellers on one side of the airplane. By 40,000 feet (12 kilometers), you've entered the stratosphere, a still layer with icy cirrus clouds that don't block your sun. Finally, by 65,000 feet (20 kilometers), you can relax in stillness and practically glide. If you plan to stay up overnight, make sure your battery is charged to run the propellers. Otherwise, you'll start losing altitude.

When it's time to land, cut the power to stop the propellers. Solar planes glide down -- engineers would rather make them efficient fliers than fast at landing. "They descend extremely slowly," says Del Frate. "When you're trying to bring one in for a landing, you'd like to grab it and pull it down."