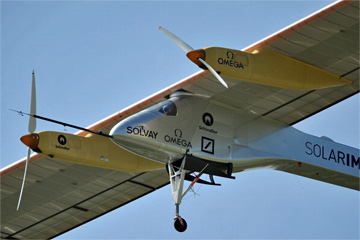 The Solar Impulse heads out for a test jaunt on May 2, 2011, in Payerne, Swtizerland, before attempting its first international flight to Brussels.
Harold Cunningham/Getty Images

Solar energy is abundant and infinitely renewable. Therefore, it's not surprising to see the proliferation of devices that rely on the sun. From solar yard lights to solar-powered homes and businesses, many people can take advantage of the energy the sun has to offer. But you might be thinking that solar yard lights aren't all that exciting (although, the science behind them can be) and maybe you're wondering what else there is out there. Would you believe solar aircraft?

Although they've been flying since the 1970s, solar aircraft may have flown so far below your radar that they sound new. A solar airplane could take you for quite an amazing ride. You'd have to start in the morning and wait for the clouds to clear. Propellers whirring, the plane would travel with yawn-inducing slowness down the runway. As the wind caught the plane, you'd ascend so slowly that you'd hardly be pressed into your seat.

You'd climb above birds, above Mount Everest, above commercial jets and above military spy planes (NASA and AeroVironment's Helios climbed to 96, 863 feet [29,524 meters]). You'd settle into the stratosphere, home to icy cirrus clouds.

However fun such a joyride might sound, solar planes are designed for other uses. Since they're basically low-flying satellites, at first NASA envisioned parking them over cities as communications platforms, but that was before we had many cell phone towers. Now, the military is eyeing solar planes for surveillance. They can, in theory, stay aloft for years. In reality, though, the stats aren't quite there yet: The record is two weeks (really!) without landing, set by QinetiQ's unmanned "Zephyr." For manned aircraft, however, the record is 26 hours, 10 minutes and 19 seconds, held by the Swiss aircraft Solar Impulse.

With records like these on their side, some organizations hope to change attitudes that solar power is weak and inefficient.

Probably the easiest way to understand how solar aircraft work is by comparing them to more common airplanes in the sky. We'll look at one commercial jet -- Boeing's 747-400 -- and one military jet -- the F-22A Raptor.