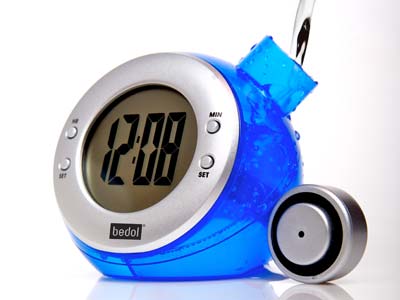 Can it really be this easy?
Image courtesy Bedol

You can still find quite a number of operating water clocks in the 21st century world. However, sine we've happened upon a number of reliable timekeeping technologies that don't require trips to the well and 30-foot (9-meter) towers, most of these water clocks exist as either museum pieces or works of kinetic art.

For instance, the whimsical Hornsby Water Clock gushes with the linear progression of time in New South Wales, Australia. The fountain is actually the third largest clock in the world and combines three different ancient water clock designs. Meanwhile, the work of modern horologicartist Bernard Gitton is on display in the Indianapolis Children's Museum. Gitton's 26.5-foot (8-meter) "Time Flow Clock" uses 70 gallons (265 liters) of water, methyl alcohol and food coloring to provide visitors with the time of day.

We live in an age of widespread electricity. Ironically, hydroelectric power accounts for 19 percent of the world's energy production [source: U.S. Geographical Survey]. Due to this, you could argue that many modern clocks are essentially water-powered. If you went so far as to count the use of steam in conventional and nuclear power plants, then that percentage reaches much higher.

Another from of water-powered clock bears mentioning, despite the fact that it doesn't depend on the movement of water at all. All you need in order to power the Eco-Friendly Water-Powered Clock (pictured above) is a little water -- and a splash of natural lemon juice.

This clock runs off a simple galvanic cell battery, which entails the emersion of a cathode or positive metal (such as copper) and an anode or negative metal (such as zinc) in an electrolyte solution. The lemon-laced water serves as the electrolyte solution, which allows the transfer of electrons between the two metals, resulting in an electric cell. If you've ever used a potato to power a digital clock as a school project, then you've witnessed the same process at work. These water-powered clocks tend to sell for less than $20, not counting any lemon juice runs you'll have to make.

Ready to make the switch to liquid-based timekeeping? Explore the links below to learn even more about water clocks and other green gadgetry.