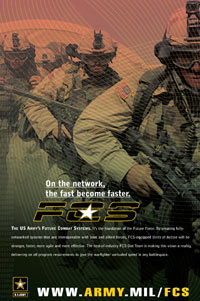 The Future Combat Systems (FCS) initiative is a massive overhaul of military technology intended to prepare the U.S. Army for modern warfare. Current projections suggest that it will be the most expensive military project in U.S. history and will take decades to design and complete. Creating the hardware, software, networks and integration necessary to make FCS work is an incredibly complicated project.

The Army wants to dominate the full-spectrum battlefield - land, sea and air. To accomplish this, it will need several different types of units. The Army must also link its operations with that of the other military branches, and the militaries of other nations that might join them in a coalition operation.

FCS is a "system of systems," because it actually comprises 18 separate systems. Each system is a type of unit, such as an unmanned artillery vehicle, a manned tank or a command and control vehicle. FCS is also sometimes called "18+1+1," where the "+1"s represent the network and the soldier who will utilize the systems. If the Army were simply revamping their military hardware and designing 18 new combat and logistics units, that would be a major project by itself. Designing all 18 from the ground up with the architecture to link every unit makes FCS truly revolutionary.

So why is the Army undertaking such a huge project? Military experts believe the nature of warfare is changing. Large-scale territory battles like those fought in World War II will disappear. Instead, the Army will probably face insurgencies and smaller conflicts spread out over wide areas. Tomorrow's Army needs the ability to deploy and redeploy as quickly as possible. To this end, the FCS has four main goals:

We'll see how the Army plans to deal with these issues next.