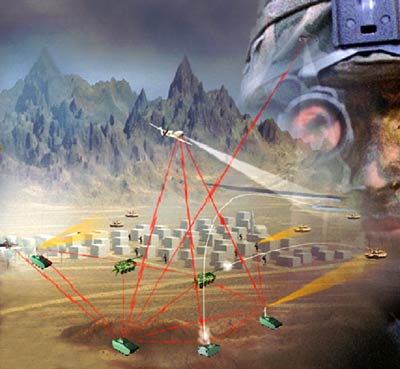 The U.S. Army's vision of how the FCS network will link different systems together.
Image courtesy U.S. Army

The Army is using spiral development to develop the FCS. Instead of working on the entire project from start to finish, with no deployable elements until everything is completed, contractors are developing systems incrementally. Finished subsystems will be immediately deployed for testing. Problems discovered with those units can be overcome as the Army adds more systems are added, and it can improve upon and upgrade early systems.

The Army keeps moving up the launch date for FCS because they want to get the technology into the field as soon as possible. It plans to deploy a test unit in 2008, with more systems releasing every two years until 2014. By that time, there will be 32 FCS-equipped brigades. The Army hopes to have the ability to equip any brigade with a fully-functional FCS system in 2016. It will take years beyond that point to fully equip the entire Army.

Like any complex design project, FCS is not entirely without problems. Critics point to several factors:

FCS is so ambitious that in some cases, the technology does not yet exist to accomplish it. The revision – some would say failure – of the JTRS system is one example of a system that has exceeded our current ability to actually make it work. Advanced ballistic armor, robotic control systems, automated sensors and high-bandwidth networks are all potential problem areas. It is likely that some FCS systems will never be fully functional and that current units and technologies will be retrofitted and upgraded to fit into the plan.

For lots more information about Future Combat Systems, the military and related topics, check out the links below.