What was the first telescope that humans launched into space? 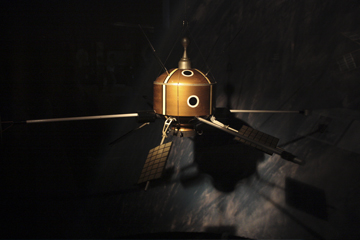 Notice the caveat included in the question: the first telescope humans (emphasis on humans) launched into space.

When we talk about space exploration, we upright mammals get a little bit high on our horses, thinking we're the masters not only of our domain, but also of our universe. Who are we to say that some other civilization on some faraway planet hasn't been launching telescopes into space for eons?

After all, we're pretty new at the whole endeavor. While our accomplishments are pretty amazing, we've only been launching orbital telescopes for a little over 50 years. And you might be surprised to learn that while NASA helped build the first satellite telescope, it was the United Kingdom who sent the first telescope into space.

In April 1962, the U.K. sent Ariel 1 into orbit. It has the distinction of not just being the first space telescope launched, but also the first international satellite, as it was a collaborative effort between the United States and Britain. The United States had started a program that supplied launches to allied nations conducting scientific work, and the British were looking into solar, UV and X-ray radiation [source: Frommert]. Ariel 1 conducted six experiments, which included measuring solar radiation and studying the ionosphere, where charged particles hang out in the upper atmosphere.

If you find yourself whispering to the person next to you, "I thought we asked about telescopes," don't be shy. Astronomy satellites are actually big old telescopes in the sky. Orbiting telescopes have a leg up over their land-bound colleagues, since they can see the infrared or ultraviolet rays that terrestrial telescopes absorb [source: Melina].

Now, whatever happened to that Ariel 1? Well, funny story. The British and Americans were getting great results from Ariel for weeks; they observed how solar flares affected X-ray flux, for instance [source: Nelson]. But suddenly their data went nuts; was Ariel 1 malfunctioning?

Kind of. Turns out that the happy collaboration between American and British scientists didn't include the United States Air Force. Unbeknownst to even NASA, the Air Force had conducted a high-altitude nuclear test, which created a radiation belt around Earth for a bit of time [source: Nelson]. (And yes, in case you're wondering -- that pretty much means that the U.S. exploded nuclear weapons in the atmosphere to see what would happen.) Ariel 1's solar generators malfunctioned as a result, and it eventually failed.

But hey, it also gave some good data and marked the origin of the space program in Britain. Not bad for the world's first space-bound telescope.