In October 2007, Attorney General nominee Michael Mukasey drew criticism for his refusal to characterize water boarding, a controversial interrogation technique considered by many to be illegal, as torture.

Mukasey, a retired federal judge nominated by President Bush, dodged the question in his confirmation hearing by the Senate Judiciary Committee, stating that "if [water boarding] amounts to torture, it is not constitutional," but never explicitly condemning it [source: NPR]. His response prompted several senators on the committee to declare that they would oppose Mukasey's nomination as Attorney General unless he denounced water boarding as a form of torture. Nevertheless, Mukasey was confirmed and served under President Bush.

Mukasey's nomination wasn't the first time the Bush administration faced controversy over what it considered appropriate interrogation techniques of terror suspects. In an October 2006 radio interview, Vice President Dick Cheney was asked if a "dunk in the water" was an acceptable form of prisoner interrogation. When he answered in the affirmative, many people took that to be an endorsement of water boarding. Human rights groups immediately seized on the statement as indicating support for torture, and Cheney's spokespeople released statements saying that Cheney was not endorsing water boarding when he made that remark.

Water boarding as it is currently described involves strapping a person to an inclined board, with their feet raised and their head lowered. The interrogators bind the person's arms and legs so no movement is possible and cover the person's face. In some descriptions, the person is gagged, and some sort of cloth covers the nose and mouth; in others, the face is wrapped in cellophane. The interrogator then repeatedly pours water onto the person's face. Depending on the exact setup, the water may or may not actually get into the person's mouth and nose; but the physical experience of being underneath a wave of water seems to be secondary to the psychological experience. The person's mind believes they are drowning, and the gag reflex kicks in as if they were choking on all that water falling on their face.

So what do intelligence professionals think of this technique? 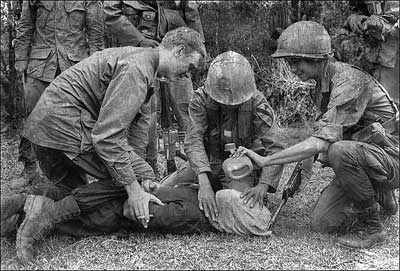 For more information on water boarding and related topics, try the links on the next page.

From Military to Mainstream: The Evolution of the AR-15
Coast Guard Rescue Swimmers Risk All to Save Lives
Thought Experiment: What Would a World Without Guns Be Like?