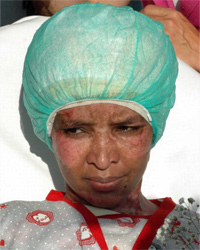 Among the many stories of abuse from Moammar Gadhafi's regime emerging from Libya in the summer of 2011, the details of Shwygar Mullah's torture proved especially heart wrenching. Shwygar was working for Moammar's son Hannibal as a nanny for his two children when, she says, Hannibal's wife Aline became upset with her for not keeping the couple's children quiet. In her rage, Aline allegedly brutally burned Shwygar with boiling water. Today, burns cover Shwygar's entire body, leaving her face nearly unrecognizable.

Her story is a testament to the pain and lasting scars -- both emotional and physical -- that burn victims suffer, and yet it remains a common and established form of torture. In fact, evidence of the practice dates back to 2000 BC, when criminals were branded with marks that forever testified to the crimes they'd committed [source: Kellaway].

More recently, specialists from Stockholm's Centre for Torture and Trauma Survivors found that out of 83 political refugees tortured in Bangladesh, 78 percent suffered burns, most of which were inflicted by cigarettes or, in some cases, hot water or an iron [source: Edston]. Torture victims can also suffer burns from exposure to chemicals or extreme cold. These wounds are particularly susceptible to infection if not properly treated, and victims often carry the scars from their torture for the rest of their lives.