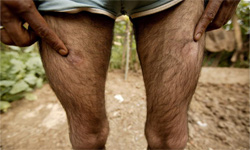 This Kashmiri man, who was picked up by the Indian Army in 2004 under suspicion of being a militant, shows two scars he received while in custody. While captive, he was interrogated, beaten and cut by a knife.
Robert Nickelsberg/Getty Images

All torture is horrific, but penetrating injuries like stab wounds and gunshots can be particularly traumatic. A Boston University study showed that such injuries stand out among modes of torture for leaving lasting neurological damage. Those findings make perfect sense; guns and knives are capable of inflicting severe internal damage, often in ways the perpetrator didn't intend. Bullets and knife wounds can separate the spinal cord, for instance, or destroy ligaments and tendons, causing permanent disabilities. What's more, victims often don't receive the necessary medical care, leading to infection and poor healing.

Although gunshot wounds often occur when a person initially is being captured, penetrating injuries are used methodically to torture victims as well. The nonprofit organization International Society for Human Rights reports that victims of torture in China have had their fingertips pierced with bamboo, needles and other sharp objects pushed through the skin on their backs and their eardrums ruptured with small sticks. Examination of previously mentioned refugees from Bangladesh revealed numerous wounds from "sharp violence" as well. In fact, 79 percent of the group studied suffered wounds inflicted by knives, swords, needles and glass, among other instruments of pain [source: Edston].