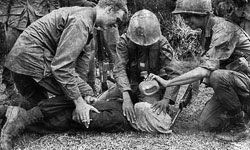 Suffocating is frightening enough, but recent research reveals a physiological reason for its effectiveness as a method of torture. Researchers from the University of Iowa found that, when mice breathed air with increased levels of CO2 -- the same gas that builds up in people when they suffocate -- the mice responded by freezing in place. Upon further study, the researchers discovered that increased levels of CO2 produced higher pH levels in the mice, triggering a strong fear response in the part of their brains wired for survival [source: Wilcox]. These studies might explain why, besides the obvious reasons, we panic when we're deprived of oxygen and, by extension, why asphyxiation is such a brutal method of torture.

The torturer can cut off the victim's air supply in a number of different ways. Asphyxiation can cause seizures and loss of consciousness, and unlike some other forms of torture, it always has the potential to kill the victim. Other possible long-term effects include chronic bronchitis resulting from inhaling liquids, as well as permanent brain damage leading to memory loss or even coma.

While torture is often used to extract information from victims, the next form of torture on our list takes this concept to a terrifying new level.