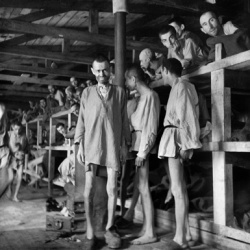 Prisoners at Buchenwald concentration camp in Germany in April 1945, just after the camp was liberated by the army of Gen. George S. Patton.
Eric Schwab/AFP/Getty Images

We often think of torturers as thugs and bullies armed with crude but effective implements of pain, but the perpetrators of forced human experimentation are much more sophisticated in their approach. Practitioners sometimes pursue goals like curing disease or advancing our understanding of the human body, but their methods are abhorrent.

Perhaps the most infamous examples of human experimentation occurred throughout World War II, carried out by Japan's Unit 731 and by doctors working in Germany's concentration camps. Unit 731 used prisoners of war as human guinea pigs, infecting them with horrific diseases and dissecting living victims in an effort to develop deadly biological weaponry. These experiments killed an estimated 10,000 prisoners, and testing of the biological weaponry on Chinese villages resulted in an additional 300,000 deaths [source: McNaught].

Experiments carried out by Nazi doctors were no less horrifying. Prisoners of concentration camps were pushed up to -- and sometimes beyond -- the limits of survival. Victims were forced to sit for hours in icy water, infected with all manner of disease and inflicted with wounds mimicking those received on the battlefield. Doctors then would treat victims with reckless, painful procedures that often ended in death.

While the atrocities committed during World War II stand out for the sheer scale and cruelty of the experiments, forced human experimentation has taken place for thousands of years. Ever since those early days, opponents of the practice have debated whether insight gained through human suffering should be used by the larger scientific community.