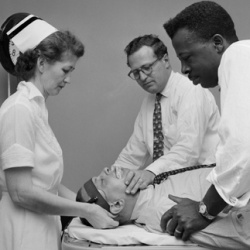 Medical electroconvulsive therapy (ECT) is performed under anesthesia to effectively treat mental illnesses such as depression. However, similar devices are used without anesthesia in torture to cause pain and disorientation.
Carl Purcell/Three Lions/Getty Images

Electric shock torture methods haven't been around as long as many other widely used methods -- humans didn't figure out how to harness electricity until the late 19th century. Once established, however, electricity soon came into use as a method of torture.

This type of torture can be as crude as introducing a current to a victim via a cattle prod or other device designed to deliver a shock attached to a car battery. Shocks are used as a torture method because they're cheap and effective. What's more, shocks tend to leave behind little obvious physical trace of the agony they produce.