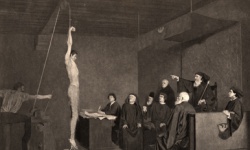 A 15-century tribunal uses ropes to elicit a confession in this engraving from a painting by A. Steinheil
Rischgitz/Getty Images

During the Vietnam War, the Viet Cong employed a form of torture called "the ropes." In "Human Adaptation to Extreme Stress: From the Holocaust to Vietnam," the book's authors describe this type of torture many American servicemen faced after capture, explaining, "Although there were many variations of this torture, it usually took the form of tying the elbows behind the back and tightening them until they touched or arching the back with a rope stretched from the feet to the throat" [source: Wilson et al.]. The tension created in the muscles by this extreme tightening --exacerbated by hanging victims from their limbs -- can cause lasting nerve damage.

Dissident Turkish national Gulderen Baran was tortured by police when she was in her early 20s. In addition to other forms of torture, she was hung by her arms, both on a wooden cross and from her wrists bound behind her. Baran suffered long-term damage to her arms, losing strength and movement in one arm, and the other suffering total paralysis [source: Amnesty International, U.S. Dept. of State].