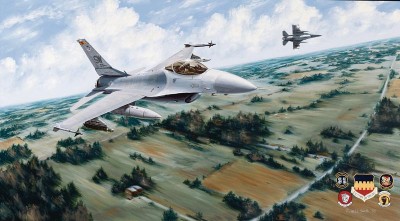 Flown by more than 15 countries, the General Dynamics F-16 Fighting Falcon continues to be one of the hottest sellers in the export market, still winning competitions against the latest planes from the factories of Europe.

One of the products of the competition that led to the McDonnell Douglas F-15 was a heated debate within the United States Air Force on the need to have a "lightweight" fighter. Led by the so-called "fighter mafia," the program set a goal to have a less expensive, almost equally capable fighter built in greater numbers than would be possible with the pricey F-15.

The Air Force resisted at first, then capitu­lated, agreeing to have a fighter competition that resulted in a fly-off between the Northrop YF-17 and the General Dynamics YF-16 in 1974. The YF-16 won the competition, but the YF-17 became the basis for the Navy's McDonnell Douglas F/A-18 Hornet. Four NATO countries (Belgium, Denmark, the Netherlands, and Norway) announced that the F-16 would also be their fighter of choice, leading to joint production efforts and a worldwide market.

The General Dynamics F-16 Fighting Falcon has experienced some problems with its engine, not yet entirely solved, and there have been a number of losses of Falcons over the years. Despite this, the performance of the F-16 has gained it a reputation as the most important current fighter in the West.

The General Dynamics F-16 Fighting Falcon -- more often called the "Electric Jet" than the "Fighting Falcon" -- was designed to take advantage of improvements in equipment as they became available. The result is that many of the F-16s in service are fully modernized with the latest radars, night-vision equipment, and missiles.