by Laurie L. Dove
START COUNTDOWNNEXT
Start the Countdown
Moonshine existed both before and after Prohibition. What makes it so appealing? © Kirn Vintage Stock/Corbis

In the beginning, there was homebrew. The ancient Egyptians cultivated grapes and made wine [source: Cornell University]. The ancient Sumerians had a deity, Ninkasi, known as the goddess of beer. As early as 1587 in colonial Virginia, Europeans made homebrew from corn. By 1620, the pilgrims at Plymouth Rock had hopped off their boats and started brewing beer. Many of the United States' founding fathers, including George Washington and Thomas Jefferson, were homebrewers [source: Homebrewers Association].

This notion of brew and sip, right in your own backyard, went well until 1919 when Prohibition in the U.S. outlawed the production of alcohol. This caused all kinds of creative efforts to keep the booze flowing, spurring the popularity of a tradition that had been occurring since the 1800s. Moonshine (whiskey made illegally at home) was distilled in hidden backwoods and spawned an entire generation of bootleggers bent on outrunning the law [source: Sanburn].

Although Prohibition ended in 1933, it didn't really resolve the troubles hobby beer brewers faced. Because of a clerical error, "and beer" was omitted from the statute that legalized home winemaking. It wasn't until 1978 that President Jimmy Carter signed H.R. 1337, which created a tax exemption for beer brewed at home for personal use [source: American Homebrewers Association].

Since then, more than 2 million people in the U.S. have tried their hands at making their own beer or wine (also known as homebrewing) [sources: American Homebrewers Association, Dinkelspiel]. The number of moonshiners is unknown because the activity remains illegal. Read on for more differences between homebrew and moonshine. 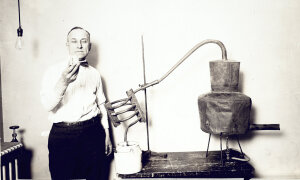