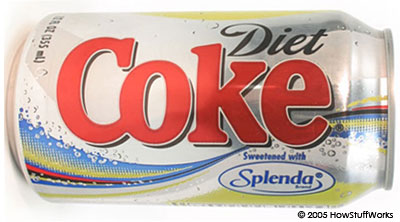 Saccharin, the first artificial sweetener, was discovered in 1879 by a scientist who failed to wash his hands before dinner and noticed that his fingers tasted sweet. Other artificial sweeteners have also been discovered simply because scientists licked their fingers while testing a new drug or smoked a cigarette that was placed near a sweet-tasting compound. Poor personal hygiene has been the dieting industry's windfall.

These laboratory discoveries underscore the fact that these sweeteners are artificial, regardless of how they're advertised. Splenda®, the newest sweetener, has been sued by the sugar industry for trying to make people think it is more natural than it really is. In a study by the Center for Science in the Public Interest (CSPI), 57 percent of people thought Splenda was a natural product, not an artificial sweetener [ref].

Why are there so many different artificial sweeteners? The answer is that there is no one sweetener that can be used in every product that calls for sweetness. Sucralose (Splenda), for example, is used in baked goods because it can withstand heat. Aspartame is found in "light" and sugar-free dairy products like yogurt. Sugar alcohols like xylitol and sorbitol are routinely used in sugar-free ice cream. The tricky part about sugar alcohols is that while they don't affect blood sugar or promote tooth decay, they have almost as many calories as sugar.

In addition to "light" and "sugar-free" food products, you can find artificial sweeteners in liquid and chewable medications (particularly children's medications), throat lozenges, cough drops, chewable vitamins, toothpaste, mouthwash, and anything else that could benefit from a little sweetness but shouldn't use sugar. Some products that could use sugar use artificial sweeteners simply because they're less expensive. A recent report from the Food Commission (UK) found that some orange sodas that were not marketed as "diet" were using blends of artificial sweeteners. Aspartame costs only two cents per liter of beverage, compared with six cents per liter for sugar.

If you don't want to ingest artificial sweeteners, you'll have to check ingredient labels and make sure you know the "real" names as opposed to the product names.

Next, we'll look at some of the controversy surrounding artificial sweeteners.

Scientists at Senomyx are trying to find chemicals that enhance the efficiency of the sweetness receptor. They have a lab full of tiny manufactured taste buds that glow green when in contact with sugars. By testing different chemicals for sweetness by using the "taste buds," they hope to find the one that will taste like sugar but without the aftertaste -- and hopefully without side effects.