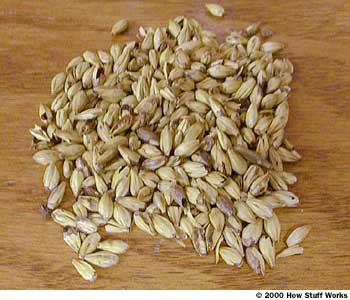 As we learned in the introduction, there are four main ingredients in beer: barley, water, hops and yeast. Each has many complexities. We'll start with malted barley.

Barley is the seed of a grain that looks a lot like wheat. Before barley can be used to make beer, it must be malted, which involves a natural conversion process.

First, the barley must be allowed to germinate, or start to sprout. This is done by soaking the barley in water for several days, and then draining the barley and holding it at about 60 degrees Fahrenheit (15.5 C) for five days. This allows the husk to open and barley to start to sprout -- at this point it is called green malt. Like all seeds, the barley contains nutrients that can sustain the growing seed until it can produce its own nutrients using photosynthesis. During the germination process, enzymes released by the plant convert these nutrients (which are starches) into sugars that can feed the plant while it grows. The key to the malting process is to stop the germination of the barley at a point when the sugar-producing enzymes are present but most of the starch is still unconverted. Eventually, these enzymes will produce the sugars that will feed the yeast to make the alcohol in the beer.

After this natural process has released the enzymes, the green malt is dried by gradually raising the temperature. The intensity of the malt flavor and color depends on how high the temperature is raised during the drying process. One final step must be completed -- removing any small roots that formed during germination -- and the malted barley is ready to begin the brewing process. Most breweries buy barley that has already been malted to their specifications.

Hops contain acids, which give beer its bitterness, as well as oils that give beer some of its flavor and aroma. Adding hops to beer also inhibits the formation of certain bacteria that can spoil the beer.

There are many different kinds of hops, each of which gives a different taste, aroma and amount of bitterness to the beer it is used in. In the United States, hops are grown mainly in Washington state. Hops are also grown in Germany, Southern England and Australia.

Yeast is the single-celled micro-organism that is responsible for creating the alcohol and carbon dioxide found in beer. There are many different kinds of yeasts used to make beer; and just as the yeast in a sourdough starter gives sourdough bread its distinctive flavor, different types of beer yeast help to give beer its various tastes.

There are two main categories of beer yeast: ale yeast and lager yeast. Ale yeast is top fermenting, meaning it rises near the surface of the beer during fermentation, and typically prefers to ferment at temperatures around 70 F (21 C). Lager yeasts are bottom fermenting. They ferment more slowly and prefer colder temperatures, around 50 F (10 C).