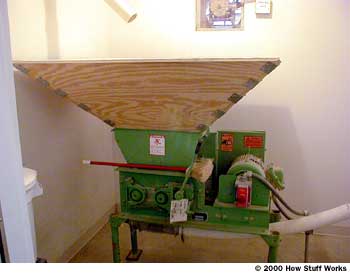 There is a fine tradeoff in the rolling process: the more the kernel is broken up, the more sugars can be extracted from the grains; but if it is broken up too much, the husk that surrounds the kernel may get broken down, which can cause a stuck mash. If the kernel is broken up just enough, then when the mash is finished, the whole husks form a filter bed that captures any solids from the liquid; but if the husks are broken down too much, they clog up and don't let the liquid through -- a stuck mash.

Next, the crushed grains pass through a feed pipe into the mash-lauter-tun. This insulated vessel has a device called a hydrator, which sprays heated water onto the grains as they enter. This eliminates any dry spots in the mash -- dry spots mean wasted sugars. The wet grains stay in the mash-lauter-tun for an hour. Since the vessel is insulated, the temperature stays at around 150 F (65 C).

The purpose of the mash is to convert the starches in the malted barley into fermentable sugars to be used in the next step of the brewing process. Starches are strings of many glucose molecules chained together -- these chains must be broken down into chains of only two or three glucose molecules before they can be fermented. We learned earlier that the malted barley contains enzymes, which can convert the starches.

There are two different types of enzymes in the malted barley: alpha-amylase and beta-amylase. The alpha enzymes break up the long chains of starches by splitting them in half. The beta enzymes break down the starches by chopping them off a couple at a time from the ends of the chain. Only if these two enzymes work together can the conversion be accomplished in a reasonable amount of time. There is a catch though: The alpha enzymes are most active at 149 to 153 F (65 to 67 C), and the beta enzymes are most active at 126 to 144 F (52 to 62 C). So the temperature and duration of the mash must be carefully controlled to get a good conversion.

The last steps needed to complete the mash are lautering and sparging. The liquid is drained from the bottom of the mash-lauter-tun and then recirculated to the top so that it is filtered through the husks of the spent grains. Additional heated water is then poured over the grains -- a process called sparging -- to make sure all of the sugars are removed.

The mash is an amazing process. Before the mash starts, the grains don't taste at all sweet, but the liquid that is drained off from the grains at the end of the mash is very sweet and sticky. This liquid, which now contains mostly fermentable sugars, goes on to the boil.

The next step in the beer brewing process is called the boil. At the end of the boil we will have a finished wort (pronounced wert).

To start, the liquid from the mash is put into a huge brew kettle. The one used at the Carolina Brewery holds more than 600 gallons (2,270 L). It is a steam jacketed brew kettle. This kettle has double walls with a gap between them through which steam is circulated. This provides very even heating, since both the bottom and the sides are heated. The temperature is raised until the liquid comes to a vigorous rolling boil, and it is held there for 90 minutes.

At the beginning of the boil, hops are added. These are called the boiling hops, and their job is to add bitterness to the beer. The acids that produce bitterness in the beer are not easy to extract from the hops, which is why they need to be boiled for up to 90 minutes. The oils that produce the hop flavor and aroma are very volatile and evaporate quickly, so the boiling hops only contribute bitterness to the beer -- the flavor and aroma are added later.

Depending on what type of beer is being brewed, more hops may be added near the end of the boil -- these are called finishing hops. Generally, hops that are added about 15 minutes before the end contribute flavor to the beer. Hops added just a few minutes before the end contribute aroma to the beer. The oils in the hops that give the beer a distinctive hop smell are the most volatile, so these hops really just need to steep in the hot wort for a few minutes, like tea leaves, to extract the oils. Some of the beers brewed at the Carolina Brewery get finishing hops added at three different times. In order for each batch of beer to taste the same, exactly the same amount of the same type of hops must be added at exactly the same time during each boil.

In the next section, we'll see the next step in the brewing process.