­If your morning routine includes a cup or two of coffee, you may know a few things about it. It's a stimulant drink, it comes from beans that are roasted and ground and, for many of us, it's a staple of li­fe.

But do you know where coffee grows and how it gets to America? How a French roast differs from an Italian roast? What a coffee cherry is? Or how decaffeinated coffee is made?

There's much more to that morning cup o' Joe than you may realize! In this article, we'll look at coffee's origins and how it spread, where it's grown, how it's harvested and processed and what roasting is all about. We'll finish by learning how to make a really great cup of coffee.

Coffee's story begins with a goat, at least in legends. It's said that Kaldi, an Ethiopi­an goatherd, noticed his goats acting very frisky after eating a certain shrub. He took some of the shrub's berries for himself, caught the buzz and coffee's future was secured.

Originally, coffee was a food, not a drink. Early East African tribes mixed the coffee berries (the unhulled bean, also called a coffee cherry) with animal fat, forming energy balls -- something like primitive Power Bars. Coffee also grew on the Arabian Peninsula, and it was there that it was first developed into a hot drink, sometime around A.D. 1000. By the 13th century, Muslims were drinking coffee fervently. The "whirling dervishes" of early Islam may have been fueled by coffee.

As Islam spread, so did coffee. But the Arabs closely guarded the coffee plants, and no fertile seeds were found outside Arabia (with the exception of the other place where coffee grew naturally, Africa) until the 1600s. Another coffee legend states that an Indian smuggler named Baba Budan left Mecca with fertile seeds strapped to his chest. Soon, coffee plants were growing in India.

As European traders returned from exotic locales such as Turkey, they brought news of and a new-found taste for the black beverage. It was the Dutch who founded the first European coffee estate on the island of Java, then a Dutch colony (now part of Indonesia), in 1616.

Coffee crossed the Atlantic around 1727. Yet another coffee legend: Brazil's emperor asks a spy, Lt. Col. Palheta, to smuggle seeds into the country. Palheta goes to French Guiana, exudes his considerable charm on the governor's wife and leaves with a farewell bouquet -- spiked with coffee seedlings. Brazil is now the world's top coffee producer.

Coffee is grown in only one U.S. state, Hawaii. Its famed Kona coffee, grown on Hawaii's volcanic mountains, is highly desired.

What gives coffee its kick? Caffeine, of course. Caffeine is trimethylxanthine (C8H10N4O2). It's an addictive stimulant drug that operates in the brain the same way amphetamines, cocaine and heroin do (although caffeine is much milder than those drugs). Caffeine occurs naturally in a number of plants, including coffee beans. Your average 6-ounce cup of drip-brewed coffee contains 100 mg of caffeine. A 12-ounce cola soft drink contains about 50 mg of caffeine. You can learn more about caffeine in How Caffeine Works.

While you may drink coffee every day, unless you've lived in a coffee-producing country you may have no idea what a coffee tree looks like. A coffee tree is a woody perennial evergreen, covered with dark-green, waxy leaves growing opposite each other in pairs. They can grow 30 feet (9 m) high, but in cultivation, coffee trees are kept short for easier harvesting. It takes three or four years after planting for the tree to become productive. The tree produces fragrant white blossoms (some say the blossoms smell like jasmine), and then, nearly a year later, the coffee cherries mature. A coffee tree produces continuously: One plant can be flowering, have immature beans and mature cherries all at the same time. Each tree can produce beans that make between 1 and 1.5 pounds (0.45 and 0.68 kg) of roasted coffee every season.

A coffee plant prefers rich soil and mild temperatures, with lots of rain and shaded sun. It grows best in a band around the middle of the world, bounded by the Tropics of Capricorn and Cancer, known as the Bean Belt. Soil, climate and altitude affect the flavor of the beans.

Coffee has two main varieties: arabica and robusta. Arabica is descended from the original Ethiopian coffee trees. The coffee made from this variety is mild and aromatic. It's the king of coffee and accounts for about 70 percent of the world's coffee production. These coffee trees grow best in higher altitudes, between 2,000 and 6,000 feet (610 and 1,829 m) above sea level. Mild temperatures (60 to 75 degrees Fahrenheit / 16 to 24 degrees Celsius) and about 60 inches (152 cm) of rain per year ensure arabica's growth. Heavy frost will kill arabica coffee trees.

Robusta coffee trees represent about 30 percent of the world's market. The bean is smaller and rounder than an arabica bean. Robusta is a heartier plant and can withstand warmer temperatures, up to 85 F (29 C). It can also thrive at lower altitudes than arabica. Robusta beans produce a bitter-tasting coffee with about 50 percent more caffeine than arabica. You'll find robusta coffee trees in Southeast Asia and Brazil.

Many coffees are blends of several types of coffee, which produces a more complex flavor.

This list is based on the number of 132-pound (60-kg) bags produced in 1997/1998, according to the National Coffee Association of the United States:

What we call a coffee bean is actually the seeds of a cherry-like fruit. Coffee trees produce berries, called coffee cherries, that turn bright red when they are ripe and ready to pick. The fruit is found in clusters along the branches of the tree. The skin of a coffee cherry (the exocarp) is thick and bitter. However, the fruit beneath it (the mesocarp) is intensely sweet and has the texture of a grape. Next comes the parenchyma, a slimy, honey-like layer, which helps protect the beans. The beans themselves are covered by a parchment-like envelope called the endocarp. This protects the two, bluish-green coffee beans, which are covered by yet another membrane, called the spermoderm or silver skin.

There is usually one coffee harvest per year. The time varies according to geographic zone, but generally, north of the Equator, harvest takes place between September and March, and south of the equator between April and May. Coffee is generally harvested by hand, either by stripping all of the cherries off the branch at one time or by selective picking. The latter is more expensive and is only used for arabica beans.

Once picked, the coffee cherries must be processed immediately.

Right after picking, it's time for processing. This is done in one of two ways:

Once the beans are dried, all of the layers are removed from the beans (this process is called hulling). Occasionally, beans may be polished in a machine designed to remove that last little bit of silver skin. Beans are then graded and sorted, first by size, then by density. Beans are either sorted by hand as they pass by on a conveyer belt or by an air jet that separates lighter (inferior) beans from heavier ones.

Coffee is shipped unroasted. This is called green coffee. It is stored in bags made of jute or sisal, or shipped in huge plastic-lined freight containers. About 7-million tons of green coffee are shipped worldwide each year.

Roasting is where coffee's flavor is fulfilled. The green coffee beans are heated in large, rotating drums using temperatures of about 550 F (288 C). The tumbling motion of the drums keeps the beans from burning.

The beans first turn a yellowish color and smell a little like popcorn. After about 8 minutes, the beans "pop" and double in size. The beans have then reached about 400 F (204 C) and begin to brown as the oils within them start to emerge. This oil is called coffee essence or caffeol. The chemical reaction of the heat and coffee essence is called pyrolysis, and is what produces the flavor and aroma of coffee. A second "pop" occurs about three to five minutes later and signals that the bean is fully roasted.

Coffee roasting is something of an art. Roastmasters use sound, sight and smell to determine when the beans are roasted to perfection. Timing is everything. Roasting time affects the color and flavor of the final brew, so the length of the roasting period depends on the type of coffee desired (shorter for American brew, longer for espresso).

Roasting times vary depending on the type of coffee you want:

Good to the Last Drop

The beans are roasted to perfection and have been poured into a cooling tray. Now what? If roasting is an art, brewing is a symphony. Four factors have to come together to make a perfect cup: the freshness of the coffee, the grind, the proportion of coffee to water, and the water itself.

Coffee needs to be kept away from light, heat and moisture. Oxygen will speed its deterioration, so store roasted beans in an airtight container and keep it in a cool, dry place for up to two weeks. Since ground coffee begins to lose flavor quickly, coffee should be ground only in the quantities needed for a few days. Refrigerate ground coffee to keep it from going stale -- even then, it's only fresh for two weeks or so.

The whole point of grinding coffee is to get the most flavor out of the bean. To ensure the best-tasting coffee, buy the beans of your choice and grind them yourself just before brewing. Coffee grinders are inexpensive, widely available machines.

Generally, the faster the brew time, the finer the coffee grind. Espresso, which is brewed in about 25 seconds, has a very fine grind, almost like powdered sugar. A coffee press takes about four minutes and uses a coarser grind than espresso. American drip coffee is coarser still -- it can take anywhere from five to ten minutes to brew coffee using a standard coffee maker.

Now that we understand the importance of freshness and just the right grind, let's take a look at how measurement and water factor in a good cup of coffee.

Coffee Around the World

For a full-bodied cup of coffee, use two tablespoons of ground coffee for each 6 ounces of water. This produces a strong coffee, similar to what you find in specialty coffee stores. Read How Espresso Machines Work to learn how to make a shot of espresso.

Another trick to a great cup of coffee is fresh, cold water. It needs to be heated to around 200 F (93 C) to extract all of the flavors of the ground beans. Your automatic coffee maker will get the water hot enough. Be sure to keep the coffee maker clean (a periodic vinegar rinse does the trick) so that it not only keeps the water pure but also operates at its most efficient.

Decaffeinated coffee is made by washing the caffeine out of beans in one of two ways, both done before roasting. In one method, a chemical solvent is used to extract the caffeine. The solvent is completely washed out before the bean is dried. The second method uses water to steam the beans, and then the outer layers, rich in caffeine, are scraped way. See How are coffee, tea and colas decaffeinated? for details. There is one naturally decaffeinated coffee: the Madagascar coffee species mascarocoffea vianneyi produces decaffeinated beans.

If you travel throughout the world to countries where coffee is the beverage of choice, you'll find that the tastes vary greatly.

For more information on coffee and related topics, check out the links on the next page. 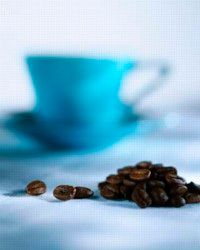 Up Next
Coffee FAQ
Explore More 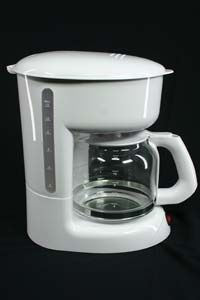 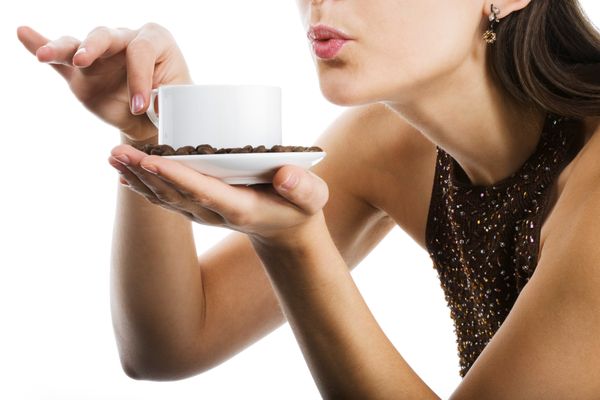 Keep Reading
Why Does Coffee Make Your Breath So Bad?
Explore More