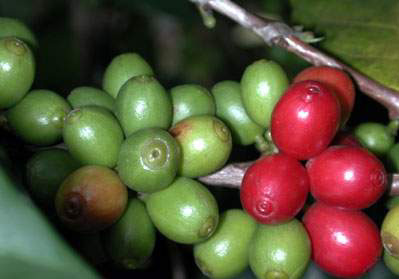 These beans are almost ready for harvesting.
Photo courtesy CoffeeResearch.org

What we call a coffee bean is actually the seeds of a cherry-like fruit. Coffee trees produce berries, called coffee cherries, that turn bright red when they are ripe and ready to pick. The fruit is found in clusters along the branches of the tree. The skin of a coffee cherry (the exocarp) is thick and bitter. However, the fruit beneath it (the mesocarp) is intensely sweet and has the texture of a grape. Next comes the parenchyma, a slimy, honey-like layer, which helps protect the beans. The beans themselves are covered by a parchment-like envelope called the endocarp. This protects the two, bluish-green coffee beans, which are covered by yet another membrane, called the spermoderm or silver skin.

There is usually one coffee harvest per year. The time varies according to geographic zone, but generally, north of the Equator, harvest takes place between September and March, and south of the equator between April and May. Coffee is generally harvested by hand, either by stripping all of the cherries off the branch at one time or by selective picking. The latter is more expensive and is only used for arabica beans.

Coffee pickers can pick between 100 and 200 pounds (45 and 90 kg) of coffee cherries per day. Only 20 percent of this weight is the actual bean.
Photo courtesy CoffeeResearch.org

Once picked, the coffee cherries must be processed immediately.