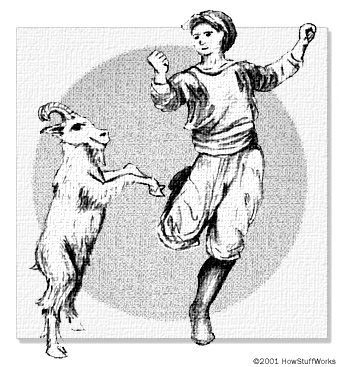 The legend of coffee begins with a goatherd and his dancing goat.

Coffee's story begins with a goat, at least in legends. It's said that Kaldi, an Ethiopi­an goatherd, noticed his goats acting very frisky after eating a certain shrub. He took some of the shrub's berries for himself, caught the buzz and coffee's future was secured.

Originally, coffee was a food, not a drink. Early East African tribes mixed the coffee berries (the unhulled bean, also called a coffee cherry) with animal fat, forming energy balls -- something like primitive Power Bars. Coffee also grew on the Arabian Peninsula, and it was there that it was first developed into a hot drink, sometime around A.D. 1000. By the 13th century, Muslims were drinking coffee fervently. The "whirling dervishes" of early Islam may have been fueled by coffee.

As Islam spread, so did coffee. But the Arabs closely guarded the coffee plants, and no fertile seeds were found outside Arabia (with the exception of the other place where coffee grew naturally, Africa) until the 1600s. Another coffee legend states that an Indian smuggler named Baba Budan left Mecca with fertile seeds strapped to his chest. Soon, coffee plants were growing in India.

As European traders returned from exotic locales such as Turkey, they brought news of and a new-found taste for the black beverage. It was the Dutch who founded the first European coffee estate on the island of Java, then a Dutch colony (now part of Indonesia), in 1616.

Coffee crossed the Atlantic around 1727. Yet another coffee legend: Brazil's emperor asks a spy, Lt. Col. Palheta, to smuggle seeds into the country. Palheta goes to French Guiana, exudes his considerable charm on the governor's wife and leaves with a farewell bouquet -- spiked with coffee seedlings. Brazil is now the world's top coffee producer.

Coffee is grown in only one U.S. state, Hawaii. Its famed Kona coffee, grown on Hawaii's volcanic mountains, is highly desired.

What gives coffee its kick? Caffeine, of course. Caffeine is trimethylxanthine (C8H10N4O2). It's an addictive stimulant drug that operates in the brain the same way amphetamines, cocaine and heroin do (although caffeine is much milder than those drugs). Caffeine occurs naturally in a number of plants, including coffee beans. Your average 6-ounce cup of drip-brewed coffee contains 100 mg of caffeine. A 12-ounce cola soft drink contains about 50 mg of caffeine. You can learn more about caffeine in How Caffeine Works.