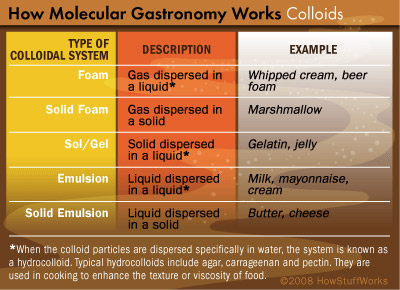 Chemists classify all matter into three groups: elements, compounds and mixtures. An element, such as carbon, hydrogen or oxygen, can't be broken down into other substances. A compound is composed of two or more ­elements joined chemically in a definite proportion. Compounds -- water, ammonia and table salt are examples -- have properties that are separate and distinct from their constituent elements. Finally, a mixture is a combination of su­bstances that aren't held together chemically and, as a result, can be separated by physical means, such as filtration or sedimentation.

All prepared food dishes are examples of a mixture known as a colloid. A colloid is a material composed of tiny particles of one substance that are dispersed, but not dissolved, in another substance. The mixture of the two substances is called a colloidal dispersion or a colloidal system. The accompanying table shows some of the most important types of colloids you come across in cooking.

­The colloidal systems described above involve only two phases, or states of matter -- gas and liquid or solid and liquid. Sometimes, especially in food preparation, more than two phases are involved. Such a colloidal system is known as a complex disperse system, or CDS. The classic example is ice cream, which is made by churning a mixture of mil­k, eggs, sugar and flavorings as it is slowly chilled. The churning disperses air bubbles into the mixture by foaming and breaks up large ice crystals. The result is a complex substance involving solids (milk fats and milk proteins), liquids (water) and gases (air) in at least two colloidal states.

To aid in the description of complex disperse systems found in food preparation, Hervé This devised a method -- a CDS shorthand, if you will -- that could be used for any dish. His method abbreviates phases with letters and uses symbols and numbers to represent processes and sizes of molecules, respectively. For example, the shorthand for aioli sauce, a mayonnaiselike emulsion of olive oil flavored with lemon juice and garlic, would be written as:

The O stands for "oil," the W for "water." The forward slash means "dispersed into." The numbers indicate sizes of the molecules. Showing molecule sizes is important because the size of solid particles in a colloid helps determine its properties. The particles dispersed in milk range from 3.9 x 10-8 to 3.937 x 10-5 inches (1 x 10-7 to 1 x 10-4 centimeters) in diameter.

After developing his system, Hervé This undertook a thorough analysis of French sauces. Most cookbooks will tell you that there are hundreds of French sauces, which are generally classified into white sauces, brown sauces, tomato sauces, the mayonnaise family and the hollandaise family. This discovered that all the French classical sauces belong to only 23 groups based on the type of CDS used to make the sauce. Not only that, This found that it was possible to move backward from a formula to a brand-new sauce never before prepared in any kitchen. In other words, you can use This' CDS system to invent new recipes from scratch.

­Understanding colloids is just the beginning. Molecular gastronomists take advantage of other scientific principles to prepare world-class dishes. We'll cover those next.