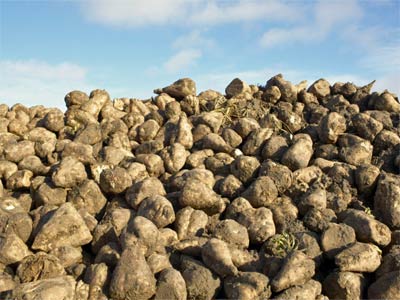 As opposed to the more temperamental sugarcane crop, farmers can grow sugar beets, like these seen here, in a wide variety of locations.
Richard Drury/­Getty Images

­There are numerous types of sugar, although most people might first think of basic table sugar, the white crystals used in most homes and in much cooking. This sugar is called sucrose and comes from sugar beets or sugarcane. Sucrose appears in other plants, too, along with glucose and fructose. It's actually in every plant since sugar and oxygen are products of photosynthesis. But unlike sugar beets and sugarcane, other plants don't produce sucrose in sufficient quantities for harvesting.

Other types of sugar include:

Besides beets and cane, sugar also can be derived from honey, many fruits (such as dates and coconuts) and tree saps. Molasses isn't technically a sugar; it's actually a potent black syrup that's a byproduct of when sugar is extracted from beets or sugarcane. White sugar contains almost no molasses, but brown or "raw" sugar contains some. Molasses can also make brown sugar stickier and, of course, a darker shade of brown.

On th­e next page, we'll look at the most popular, and perhaps­ the most controversial, of sugar substitutes: high-fructose corn syrup.