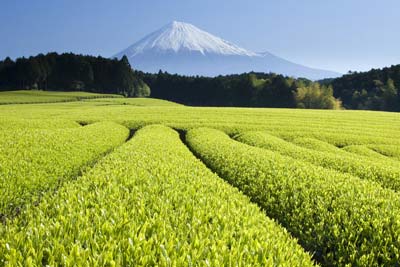 There are four main types of tea: green tea, black tea, oolong tea (pronounced wu-long) and white tea. There are even more varieties, including flavored, scented and "herbal infusions," but for the sake of simplicity we'll focus on the big four right now. What many people don't know is that these four types of tea come from one plant, not four different species of plant.

All tea begins as the plant known as Camellia sinensis. It's the way the tea leaves are processed that gives us the different teas and their specific taste, color and scent.

Tea is similar to wine in that the atmosphere in which it's grown determines much of the flavor and quality. Tea plants typically fare best in acidic soil and regions with heavy rainfall (around 40 inches per year), although they can be grown anywhere from sea level to altitudes as high as 1.3 miles above sea level.

Mass-produced tea is grown on large plantations in more than 30 countries, but the four biggest producers are China, India, Kenya and Sri Lanka. Most tea is picked by hand for better quality -- machines tend to be too rough and end up damaging too many leaves. There are generally two harvests throughout the year -- "first flush" in early spring and "second flush" in summer. Growers keep the tea plant in the early stage of growth with constant pruning and pick only two leaves and a bud from the tops of the plants.

Once workers gather enough quantities of tea leaves, their stash is quickly carried over to a tea factory located right on the plantation. The factory is placed close to source of the leaves because once the tea is plucked, oxidation immediately begins. The oxidation process is important in understanding tea -- it must be closely monitored during production and is essential in determining the type and quality of the tea. Before we go any further we'll talk about oxidation.

Oxidation is what happens when you cut up a piece of fruit and leave it out for too long -- the color of the fruit changes, usually turning brown or black. Oxidation is also a fancier name for what happens when your car rusts. Oxygen molecules react with any kind of substance, from the metal on a bicycle to the inside of an apple. Normally, the skin of an apple protects the inside from oxygen, but when the fruit is exposed to the air, oxygen molecules actually "burn" it. Oxidation isn't great for fruit or the hood of your car, but, depending on the type of tea you want, it can be a necessary part of processing tea leaves.