Other Types of Tea 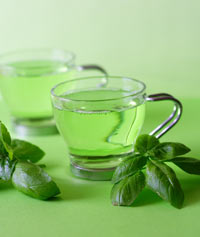 It's difficult to imagine green tea coming from the same plant as black tea. The color of green tea is much different -- hues range from green to yellow -- and the taste and smell of the drink are very grassy and natural.

Like black tea, green tea also has five steps in its process, and, when written out, they look nearly the same. The five steps for processing green tea are: withering, steaming, rolling, drying and sorting.

The big difference here is the inclusion of steaming and the removal of the oxidation process. After the leaves wither and lose some of their moisture during the first step, they are immediately steamed or pan fried. This stops the oxidation process before it can really get started -- in a way, it's almost like putting car wax on your car to keep it from rusting. Steaming "freezes" the tea leaf in its current state, keeping the color green. After steaming, the leaves are cooled and rolled to release the remaining moisture, dried with hot air and sorted according to size and grade.

Oolong tea falls right between green and black. It's only partially oxidized, so it never quite reaches the same stage as black tea.

White tea is a specialty tea and somewhat rare, picked only two days out of the year when the buds haven't fully opened. It's similar to green tea in color as the oxidation process is stopped early on, but the taste is smoother and less grassy. The rareness of white tea makes it slightly more expensive than others -- it has only been available outside of China for a few years, as the leaves were only reserved for Chinese nobility.

Some teas can have scent or flavor added to them. Chai tea, for example, is black tea brewed with several spices, including cinnamon, cloves, pepper and ginger.

A common misconception surrounds herbal "teas," however. Drinks labeled "herbal tea," "herbal infusion" or "tisane" actually have nothing to do with the tea plant. They are simply dried fruits or herbs infused in hot water. People generally associate herbal infusions with tea, though, and each has its own unique qualities. Here are a few major kinds: