The Health Benefits and Science of Tea 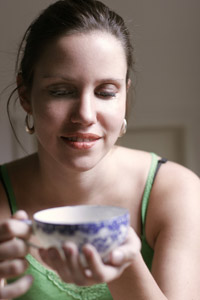 Recent research findings about the health benefits of tea shouldn't be surprising -- the Chinese have praised tea for its medicinal qualities for thousands of years. But only within the past 10 years have Western scientists begun to explore what's inside tea.

A single tea leaf contains a wide variety of substances, including amino acids, carbohydrates, lipids, minerals and vitamins. The two substances receiving the most attention in tea, however, are antioxidants and caffeine.

We learned about oxidation a few sections ago. Just like tea leaves, apples and car hoods, humans are susceptible to oxidation. Oxygen molecules create stress on our tissues and organs by introducing harmful free radicals that lead to complications such as cancer and heart disease. Free radicals are charged atoms or molecules -- they have one or more unpaired electrons. This causes the free radicals to become highly unstable, and they rush around the nearby molecules trying to find the appropriate electron and gain stability. (Think of them as obsessive-compulsive, always trying to keep an equal number of protons and electrons.) They have to steal an electron from the molecules -- this creates a chain reaction of giving and taking, and eventually an entire cell will be destroyed.

Antioxidants are substances that slow down the damaging effects of oxidation, and they are found naturally in fruits and vegetables. Once they are introduced into the body, antioxidants neutralize free radicals by giving up an electron. The antioxidant is harmless, because it is stable with or without its extra electron. Examples of powerful antioxidants are vitamin C, vitamin E and beta-carotene.

Tea contains a wide range of antioxidants. Scientists haven't agreed yet on the effectiveness of these substances, but the general consensus points toward polyphenolic compounds as the most abundant and helpful source of antioxidants in tea. Several kinds of polyphenols known as catechins -- including epicatechin, epicatechin gallate, epigallocatechin and epigallocatechin gallate (EGCG) -- are common in green tea and considered to provide the best protection from oxidation. Black tea offers strong antioxidants, too, but the polyphenols have different structures and are not quite as effective. The reason for this goes back once again to the different ways to process tea -- the catechins that stay in green tea transform into theaflavin and thearubigin in black teas.

Like coffee, tea contains caffeine, the stimulant that wakes us up and increases concentration. The amount of caffeine in a cup of tea varies greatly -- everything from location to processing decisions affects the outcome -- but most agree that there's more caffeine in coffee than in tea. A standard cup of coffee contains anywhere from 80 to 120 milligrams (mg) of caffeine, while a cup of tea can have between 20 and 60 mg of caffeine. Most reports note that black tea is the strongest, containing about 30 to 40 mg. Green tea and oolong tea contain less, somewhere between 10 and 20 mg. White tea is thought to contain almost a negligible amount of caffeine, about 1 percent of the caffeine in a cup of coffee.

For lots more information on tea and related topics, check out the links below.