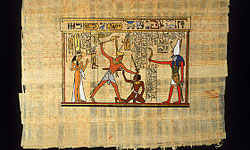 No one will deny that the Chinese changed the world forever with the invention of paper around 140 B.C., but what many people don't know is that the Egyptians had developed an admirable substitute thousands of years earlier from the papyrus plant [source: UCLA]. This stiff, reedlike plant grew (and continues to grow) in the marshy areas lining the Nile, among other places. Its tough, fibrous interior proved ideal for making durable sheets of writing material, along with sails, sandals, mats and other necessities of ancient Egyptian life. After the sheets were made, they were often combined into scrolls, which were then filled with everything from religious texts to literature and even music.

Ancient Egyptians kept the time-consuming process of manufacturing papyrus a closely guarded secret, allowing them to trade papyrus sheets throughout the region. Because the process was never documented, it was ultimately lost until Dr. Hassan Ragab found a way to make papyrus sheets in 1965 [source: Egyptian Papyrus].