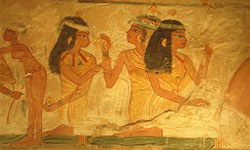 The bread that Egyptians ate was hard on their teeth.
Frans Lemmens/Photographer's Choice/Getty Images

The next time you peruse the counter at the 7-Eleven for Mentos or Breath Savers, you should thank the ancient Egyptians for devising a way to conceal the unpleasant aromas our mouths sometimes exude. Just as in modern times, bad breath in ancient Egypt often was a symptom of poor dental health. Unlike us, the Egyptians didn't gorge on sugary soft drinks and foods that contribute to tooth decay, but the stones they used to grind flour for bread contributed a lot of sand and grit to their diet, which wore down tooth enamel to expose the pulp of the tooth, making it vulnerable to infection.

The Egyptians had specialists for many medical problems, but unfortunately, they didn't have dentists or oral surgeons to fix their deteriorating teeth and gums. Instead, they simply suffered, and scientists who've examined mummies have found severely worn teeth and evidence of abscesses, even in youthful Egyptians. To cope with the unpleasant odors from their rotting mouths, Egyptians invented the first mints, which were a combination of frankincense, myrrh and cinnamon boiled with honey and shaped into pellets [source: Brier and Hobbs].