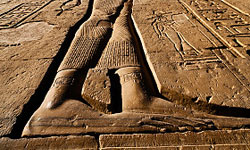 Whenever you lock your door at night and slide the deadbolt into place, say a prayer of thanks for the ancient Egyptian invention of door locks. The earliest such device, created around 4000 B.C., basically was a pin-tumbler lock, in which a hollowed-out bolt in the door was connected to pins that could be manipulated by insertion of a key. When the key pushed upward on the pins, they slipped away from the bolt shaft, allowing it to be withdrawn.

One drawback of these ancient locks was their size. The biggest ones were up to 2 feet (0.6 meters) in length [source: How It Works]. Egyptian locks actually were more secure than the technology later developed by the Romans, who used a simpler design with a spring rather than a bolt to hold the door in place. The Roman locks were hidden inside the door, but compared to the Egyptian locks, they were relatively easy to pick [source: de Vries].