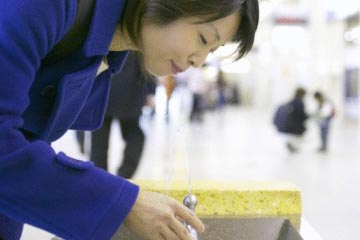 NASA's research on water purification may have reached your public drinking fountain.
Jupiterimages/Photos.com/Thinkstock

Plants can't just suck out pollution; they can clear up dirty water, too. The BioHome also came equipped with a plant-based sewage system. Instead of being chemically processed, sewage would just be diverted through a long piece of plastic pipe stuffed with aquatic hyacinths. By the time the sewage made its way through the maze of plants, the water was so clear of bacteria and impurities that it could be used to water a garden. NASA's John C. Stennis Space Center in Missouri still uses this method to process its sewage.

But the hyacinths weren't NASA's first foray into simplified water purification. In the 1960s, Apollo astronauts got their drinking water from onboard fuel cells. The cells created electricity by mixing together hydrogen and oxygen, and water was simply a convenient by-product. But before astronauts mixed fuel-cell runoff into their Tang, NASA wanted to first run it through a filter to kill any possible waterborne bacteria. On Earth, water purification was a relatively cumbersome process; you'd either need to boil the water or run it through a set of bulky filters. Since neither would be possible in the cramped, low-power environment of a space capsule, NASA instead invented a device that would kill bacteria by shooting the water full of negatively charged silver atoms. The particles would latch onto bacteria, destroy them, and then be filtered out of the water to be used again. It was essentially an electronic water purification device. Since it was no bigger than a pack of cards, it was also extremely portable.

After Apollo, a company in north Georgia got the commercial rights to the technology and soon adapted it for use everywhere, from public fountains to commercial pools to zoo tanks. If you've gone swimming at a YMCA or seen the decorative fountains at Disneyland, you've seen water that's been purified the same as it was on the way to the moon.

In 2008, the International Space Station welcomed a completely new type of water purification. For years, the station had received its water from regular space shuttle shipments, but with the shuttle program phasing out, astronauts knew they'd need to be more frugal with their water. Their solution was to start drinking urine. Starting in 2008, astronauts aboard the International Space Station began getting their drinking water from an onboard system that takes urine, sweat and tears and processes it into potable water. It may sound gross, but the cutting-edge system can effectively recycle up to 95 percent of all onboard water -- making regular water deliveries a thing of the past.

Urine-converters are probably a long way from ending up on the shelves at your local hardware store, but if NASA ever decides to venture deeper into the solar system, they'll be glad they brought along a machine to turn "yesterday's coffee into today's coffee" [source: Atkinson].