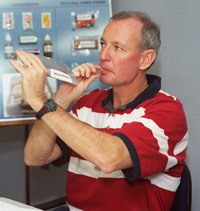 ­In­ 1­961, a space center in Houston, Texas, opened to house the newly formed Space Task Group. In 1973, NASA rechristened it the Lyndon B. Johnson Space Center (JSC). Today, the JSC is probably best known for its Mission Control Center, which manages all shuttle missions. But when you drive up to the campus and pass the display of rockets at its entrance, you're quickly aware that this center has much more going on inside. JSC leads NASA's efforts in the International Space Center, hosts the astronaut corps (where astronauts train), and brings together students, astronauts, scientists and engineers through education, technology and research. Some of that research includes space food development.

Within its rooms, scientists research food and agriculture solutions that will increase the shelf life and nutritional content of foods, reduce the effects of radiation and even solve the problem of how to grow hydroponic (or soilless) soybeans. This knowledge and technology will be needed for future expeditions to Mars or other planets.

The foods currently produced at the facility aren't mysterious mixtures bubbling in test tubes -- these foods are the same as those we eat on Earth, and some are even the same as those we buy at local supermarket. The difference is the way space food is processed and packaged.

In this article, we'll learn what happens inside NASA's Space Food Systems Lab and how the lab develops, processes and packages space food.