What is a nano quadrotor? 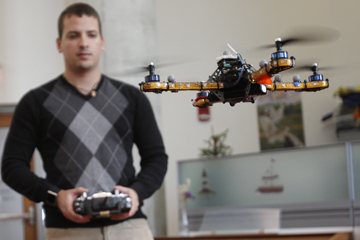 MIT graduate student Daniel Soltero demonstrates the use of a quadrotor inside the MIT Computer Science and Artificial Intelligence Laboratory. The nano quadrotor is a much smaller version of this.See robot pictures.
Jessica Rinaldi/For The Washington Post via Getty Images

The Rise of the Machines. It's not just the title of the dreadful third installment of the "Terminator" movie franchise; it's also a good way to describe a recent wave of advances in technology that have robots performing a wide variety of complicated tasks, from trading stocks to harvesting crops to performing surgery. With great technological ability, however, often comes even greater (and probably justified) paranoia. The idea of robots and other forms of rogue technology taking over the planet is a well-worn one in literature, television and film. Way back in 1968 Stanley Kubrick introduced us to HAL, a sensitive supercomputer that could control a high-powered spacecraft and ward off those who tried to usurp his power at the same time [source: Ebert].

These days, one of the most ominous depictions of the power of robot technology is a YouTube video of a swarm of 20 small drones humming along in unison, dipping through windows, changing formations and even zipping around in a synchronized figure-eight pattern. All without a human controlling them.

Developed by engineers at the University of Pennsylvania's General Robotics, Automation, Sensing and Perception (GRASP) laboratory, a nano quadrotor is a tiny robot programmed to do big things in the air. These autonomous machines are equipped with four tiny propellers at each corner and designed for what their creators call "agile flight": soaring through the air in concert with one another like a flock of pelicans (or maybe a formation of droid starfighters fresh from the set of "Star Wars"). Not only can quadrotors fly in complex formations, they can also change formations seamlessly in midair -- from a four-by-five rectangle to an "x" pattern, for example -- as well as navigate various obstacles. Videos have captured the robots performing a number of other tasks, including building simple structures and performing the James Bond theme song [sources: Davies, Owano, Saenz].

So just how do these things work? Nano quadrotor developers aren't giving up all of their secrets, but there are some clues.