The Advantages of Iron 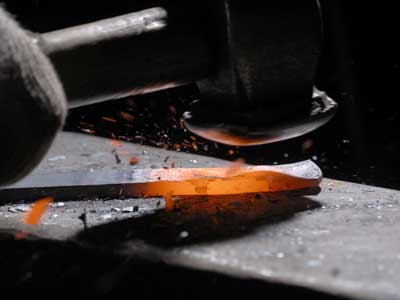 ­Iron is an incredibly useful substance. It's less brittle than stone yet, compared to wood or copper, extremely strong. If properly heated, iron is also relatively easy to shape into various forms, as well as refine, using simple tools. And speaking of those tools, unlike wood, iron can handle high temperatures, allowing us to build everything from fire tongs to furnaces out of it. In contrast to most substances, you can also magnetize iron, making it useful in the creation of electric motors and generators. Finally, there certainly aren't any iron shortages to worry about. The Earth's crust is 5 percent iron, and in some areas, the element concentrates in ores that contain as much as 70 percent iron.

When you compare iron and steel with something like aluminum, you can see why it was so important historically. To refine aluminum, you need access to huge quantities of electricity. Furthermore, to shape aluminum, you have to either cast it or extrude it. Iron, however, is much easier to manipulate. The element has been useful to people for thousands of years, while aluminum really didn't exist in any meaningful way until the 20th century.

­Fortunately, iron can be created relatively easily with tools that were available to primitive societies. There will likely come a day when humans become so technologically advanced that iron is completely replaced by aluminum, plastics and things like carbon and glass fibers. But right now, the economic equation gives inexpensive iron and steel a huge advantage over these much more expensive alternatives.

The only real problem with iron and steel is rust. Fortunately, you can control rust by painting, galvanizing, chrome plating or coating the iron with a sacrificial anode, which corrodes faster than the stronger metal. Think of this last option as hiring a bodyguard to take a bullet for the president. The more active metal has to almost completely corrode before the less active iron or steel begins the process.

­Humans have come up with countless uses for iron, from carpentry tools and culinary equipment to complicated machinery and instruments of torture. Before iron can be put to any of these uses, however, it has to be mined from the ground.

Ease of production plays a huge role in defining a material's worth. The 10-inch (25-centimeter) pyramid at the tip of the Washington Monument is actually made of aluminum rather than gold, because gold was less valuable than aluminum in 1884.