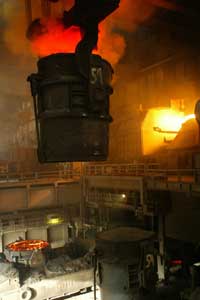 A ladle filled with molten iron approaches a blast furnace that will convert it to liquid steel.
Sean Gallup/Getty Images News/­Getty Images

­Steel is iron that has most of the impurities removed. Steel also has a consistent concentration of carbon throughout (0.5 to 1.5 percent). Impurities like silica, phosphorous and sulfur weaken steel tremendously, so they must be eliminated. The advantage of steel over iron is greatly improved strength.

The open-hearth furnace is one way to create steel from pig iron. The pig iron, limestone and iron ore go into an open-hearth furnace. It is heated to about 1,600 degrees F (871 degrees C). The limestone and ore form a slag that floats on the surface. Impurities, including carbon, are oxidized and float out of the iron into the slag. When the carbon content is right, you have carbon steel.

Another way to create steel from pig iron is the Bessemer process, which involves the oxidation of the impurities in the pig iron by blowing air through the molten iron in a Bessemer converter. The heat of oxidation raises the temperature and keeps the iron molten. As the air passes through the molten pig iron, impurities unite with the oxygen to form oxides. Carbon monoxide burns off and the other impurities form slag.

However, most modern steel plants use what's called a basic oxygen furnace to create steel. The advantage is speed, as the process is roughly 10 times faster than the open-hearth furnace. In these furnaces, high-purity oxygen blows through the molten pig iron, lowering carbon, silicon, manganese and phosphorous levels. The addition of chemical cleaning agents called fluxes help to reduce the sulfur and phosphorous levels.

When you think about it, there are two accidents of nature that have made it much easier for human technology to advance and flourish. One is the huge availability of iron ore. The second is the accessibility of vast quantities of oil and coal to power the production of iron. Without iron and energy, we probably would not have gotten nearly as far as we have today.

Explore the links below to learn even more about iron and steel.