Browse the article Is Earth the Only Planet With Tectonic Plates? 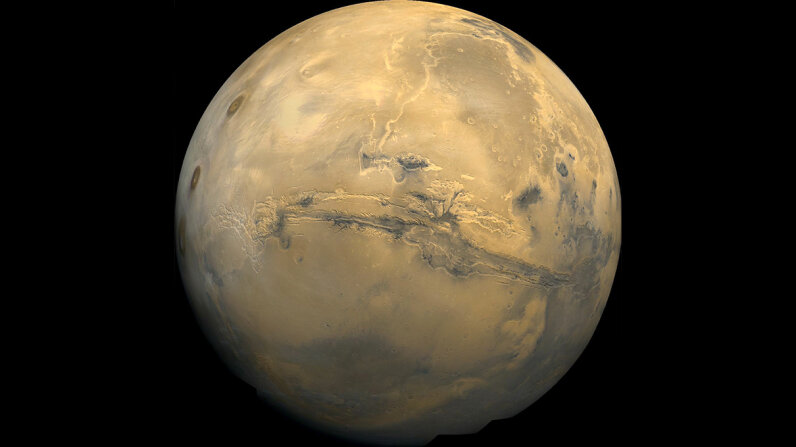 The largest canyon in the solar system, Valles Marineris, cuts a wide swath across Mars and extends more than 1,864 miles (3,000 kilometers) long and 372 miles (600 kilometers) across. Could it have been created by tectonic plates? NASA

On Earth, plate tectonics build up mountains, set off tsunamis and form volcanoes. To paraphrase the late evolutionary biologist Theodosius Dobzhansky, nothing about the world's surface makes sense except in the light of this process. Earth's outermost layer is made up of tectonic plates moving at a deliberate pace. Some contain entire continents or subcontinents. Other plates lie beneath the ocean, waiting to be pulled down into the earth's super-heated core.

But what's the situation like on other planets? Do they experience plate tectonics as well, or is the phenomenon limited to Earth? Well in this respect, our home appears to be kind of unique. Sure, other planets are geologically active, but we have yet to find an Earth-like system of plate tectonics elsewhere in the universe.

Thomas Watters is a senior scientist at the National Air and Space Museum in Washington, D.C. Planetary tectonics are one of his research interests. In an email, he says that while Earth has at least 15 moving plates, all the evidence suggests Mercury is a one-plate planet.

This means Mercury's surface cannot undergo plate tectonics as we know them. On Earth, the separate plates diverge, collide head-on or rub past each other. We don't really see these things happening on Mercury because the planet has only one plate to work with. Nevertheless, its crust is not exactly inert. Deep beneath the surface, Mercury's interior is cooling down. The drop in sub-surface temperature is forcing the planet's core to contract — and its crust is responding in kind.

"The crust must adjust to this reduction [in volume]," Watters says. And it does. As the planet gets smaller, Mercury's lone plate is crumpling up. If you were to go hiking across the surface, you'd encounter high cliffs and elongated valleys. According to Watters, these features are "formed by thrust faults, where crustal materials are pushed together, break and one part of the crust is thrust up and over the other." Similar faults can be found on Earth, especially in spots where two plates are converging.

Watters was the lead author of a 2016 paper on some of Mercury's scarps, which are step-like ridges created by faults. Those his team reviewed appear to be less than 50 million years old, making them quite young by geologic standards. Their age indicates that Mercury is still experiencing crustal movement.

One of the coauthors of that paper was Colorado-based astronomer Clark R. Chapman. He likens the planet to a dried-up fruit. "Mercury's crust has shrunken a lot and is very likely continuing to shrink ... because the interior is cooling and shrinking," Chapman explains via email. "A rough analogue would be the skin of an apple: As the interior of the apple gradually dries out and shrinks, it causes the skin of the apple to get wrinkled." This same process is unfolding closer to home. Like Mercury, Earth's moon is a one-plate body that's now shrinking as its core cools.

Martian landscape must be positively spellbinding. The red planet contains the solar system's largest volcano along with its biggest canyon. Scientists have named the latter "Valles Marineris." At 1,864 miles (3,000 kilometers) long and 372 miles (600 kilometers) across, it makes Earth's biggest canyons look like the cracks in a concrete driveway.

Mars is also notable for its so-called crustal dichotomy: The crust of the southern hemisphere has an average thickness of 36 miles (58 kilometers). Yet, that in the northern hemisphere is — again, on average — just 20 miles (32 kilometers) thick. Watters says this "contrast in topography" is reminiscent of the differences "between Earth's continents and ocean basins."

Could the disparity be the handiwork of plate tectonics? An Yin, a professor of geology at UCLA has written multiple papers about the surface of Mars. In 2012, he suggested that a Martian plateau called the Tharis Rise might've been made by a subduction zone — which is a place where one plate dives beneath another. That same year, he cited the Valles Marineris as a possible boundary area between two plates.

"They are hypotheses supported by what we know," Yin says via email, "but with more data to come in in the next couple of decades, things may change." For the moment, he's of the opinion that Mars has a primitive form of plate tectonics. However, even if this is true, Mars doesn't possess many plates. Also, plate-related activity on the red planet appears to progress at a much slower rate than it does on Earth.

Now let's move on to one of our other celestial neighbors, shall we? The gassy atmosphere of Venus makes it a tough planet to survey. Still, we have learned a few things about its surface. "The present crust of Venus is relatively young," Watters says. Judging by some of the craters left behind by meteorites, its present-day surface is less than 1 billion years old.

Age isn't everything, though. Just like Earth, Venus has its own ridges, faults and (possibly active) volcanoes. A 2017 study argued that Venus owes much of its topography to prehistoric mantle plumes. These are columns of molten rock that sometimes reach a planet's crust. When they do, they often generate a "hot spot" of volcanic activity. Here on Earth, the lava released by mantle plumes created the Hawaiian Islands as well as Iceland.

In theory, the volcanic material unleashed by hot spots could explain the presence of coronae: large, oval-shaped structures found on Venus' surface. The plumes may have even led to the formation of unorthodox subduction zones around coronae rims. Not exactly plate tectonics, but still pretty neat.

Now That's Interesting
Some scientists think the existence of plate tectonics could be a prerequisite for life. As we've discussed, the plates tend to promote volcanic eruptions, which release carbon dioxide into the atmosphere. Such emissions help keep Earth's temperature nice and stable. And that's just one of the benefits they provide to organisms. Who knows? Earth is the only planet known to harbor life. Maybe its abnormal tectonic makeup is one of the reasons why.