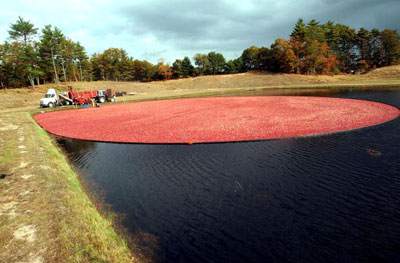 The cranberry growing season lasts from April to November; the fruiting buds mature during the winter dormancy period. During the dormant season, severe winter weather could harm or even kill cranberry vines, which is why farmers must take preventative measures to protect their crop. The farmers flood the cranberry bogs (which often freeze over) to protect the vines and buds from injuries associated with cold weather. Generally, the initial flood takes place in December and is held in the bogs until winter's end.

A practice called sanding is also crucial to the health of the cranberries and the bog itself. It's exactly what you think it is -- a layer of sand measuring 1/2 inch to 2 inches thick (1.27 to 5.08 centimeters) is applied to the surface of the cranberry bogs every few years to achieve a variety of positive effects. During the winter, growers may apply sand to the ice. After the spring thaw, the sand filters all the way down to the vines. This stimulates new growth because the sand covers the stems, which encourages rooting and enables the vines to become more productive. Sanding also reduces insect populations, suppresses disease, controls weeds and fungi and improves the bog's overall productivity. The sand actually buries weed seeds, fungal spores, insect eggs and living insects [source CCGGA].

As spring rolls in, the vines wake up from their long state of dormancy for the growing season. The growers remove the winter flood from the bogs as the warmer weather arrives. Even though the harsh winter months are behind them, the farmers still face lingering threats that could potentially wipe out their entire harvest -- a hard frost, for example. As the growing season begins, farmers have to be on their toes and keep a watchful eye on the weather forecast. Workers may need to turn on the irrigation system at a moment's notice to keep water flowing over the vines in the bog if the berries are in danger of freezing.

Even bogs require a spring cleaning. This is when farmers control their weed populations and make necessary renovations to their cranberries' habitat. In some cases, replanting may be necessary. Preparation for planting new vines may require the use of heavy equipment to move the soil, level the bog and square off beds. Workers may also revamp the bog's irrigation systems if they need maintenance.

Sprinkler systems are needed to help cranberry crops contend with the summer heat. Cranberries can require up to a quarter of an inch (0.63 cm) of water per acre per day during the hottest and driest days [source: CCCGA]. Bees play a large role during the summer months as well due to pollination.

The fall harvest takes place every year from mid-September to early November. We'll see what all the excitement's about on the next page.