Predicting the Earth's future is a bit like predicting the weather: the further you look ahead, the more your accuracy suffers. Based on this logic, it seems impossible to look ahead 50,000 years and have any chance of being right. And yet we have more than 4 billion years of history from which to draw lessons. When you consider the history of Earth on a geologic scale, you can count on certain inexorable processes -- evolution, extinction, plate tectonics, climate change -- to continue shaping our planet far into the foreseeable future. Let's look at some of these processes to predict what the Earth might look like in 50 millennia.

First, Earth is a planet that spins on its axis as it revolves around the sun. These movements have certain implications for organisms trying to eke out an existence down on the planetary surface. For example, Earth not only rotates on its axis, it also wobbles like a spinning top. Astronomers call this precession, and it causes the axis to point to different parts of the sky in a 26,000-year cycle. Right now, the North Pole points to Polaris -- the North Star. In 13,000 years, Vega will become the new North Star. In 50,000 years, Earth will have completed two precession cycles, which means we'll be right where we are today, at least in terms of our view of the night sky.

More significant are the changes that occur because of aberrations in Earth's orbit and tilt. Over a 97,000-year cycle, Earth's orbit changes from a mostly circular shape to a somewhat elliptical shape. At the same time, the tilt of Earth's axis shifts a few degrees, from 22.1 degrees at one extreme to 24.5 degrees at the other. The combined effect of these movements has a profound impact on how much solar energy reaches the planet. When the Earth's position in space is just right, the planet experiences an ice age, a time when polar ice sheets grow thicker and cover more continental land mass. Historically, ice ages have lasted about 100,000 years, with warmer, interglacial periods lasting about 10,000 years in between. Earth is currently enjoying one of these interglacial periods, but will eventually enter another deep freeze. Many scientists think that the next ice age will reach its peak in about 80,000 years [source: Revkin]. So, in 50,000 years, the planet will likely be a much colder place, with ice sheets approaching areas as far south as New York City.

What about global warming? We'll get to that next.

The Earth's Future: From Wet to Icy to Erupting? 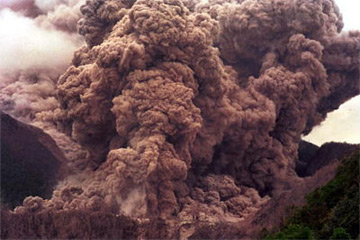 This volcanic eruption at the Soufriere Hills volcano on the Caribbean island of Montserrat pales in comparison to what we might expect from the eruption of a supervolcano.
Kevin West/Getty Images

How does global warming affect the scenario of the ice age in our future? In the long term, not much. In the near term, however, global warming could change our world drastically. The full effects of global warming will be felt in the next 200 years, say by 2200. At that time, atmospheric carbon dioxide levels will be higher than any time during the past 650,000 years [source: Thompson and Than]. The carbon dioxide will prevent solar energy from radiating back into space, warming the planet considerably. As average temperatures rise, even just a couple of degrees, glaciers will melt, sea levels will rise and coastal flooding will occur. The oceans will also be warmer and more acidic, which will cause a widespread collapse of coral reefs. Many marine species will face extinction, but they won't be alone. On land, a quarter of all species of plants and animals will disappear forever.

This will be a critical time for our home planet, and it might seem that things couldn't get much worse. Unfortunately, if Earth's 4-billion-year history teaches us only one thing, it's that global apocalypses do occur if you stretch time out far enough. In 50,000 years, we will almost certainly face an epic catastrophe that will change the planet forever. The catastrophe could take the form of an asteroid or a comet, which, upon striking the Earth, would end life as we know it. Astronomers estimate that such impacts occur every million years on average, so the odds are still in our favor, even 50,000 years into the future. A more likely cataclysm will come from the Earth itself. The same tectonic forces that cause the continents to wander across the globe also power supervolcanoes that can spew enough ash and smoke into the atmosphere to block the sun's rays for 10 to 15 years. Geologists believe that such eruptions occur every 50,000 years, so here the odds aren't in our favor [source: Ravilious].

Facing the effects of an event as devastating as a supervolcano, an already hobbled Earth will certainly experience a mass extinction rivalling other extinctions marked in the fossil record. The most famous is the extinction that wiped out the dinosaurs at the end of the Cretaceous period. But the mass demise of dinosaurs paled in comparison to an extinction event that occurred at the end of the Permian period, about 251 million years ago. When the dying was over, 95 percent of all marine species and 70 percent of all land vertebrates had vanished [source: Discovery Earth]. And can you guess what caused this killing spree? Yep, it was a supervolcano -- more specifically, the eruption of the Siberian Traps, which affected the global climate.

So, what are the chances Homo sapiens will be around to enjoy Earth in 50,000 years? When you consider our species has been around for just 100,000 years and the longest living human civilization has lasted only for 3,000 years, it seems unlikely we'll be a dominant species far into the future.

And yet humans have evolved and continue to evolve today. Some scientists estimate that in the past 10,000 years, humans have evolved 100 times faster than at any other time [source: Ward]. So perhaps the chances are high that we'll accumulate the changes necessary to adapt to Earth's future conditions. An interesting feature on MSNBC, called "Before and After Humans," maps out what might become of our species in the next 1 to 4 million years. One thing seems certain: If we're around, we won't look or act like the people who walk the Earth today.