Fauna and Flora on the Galapagos Islands 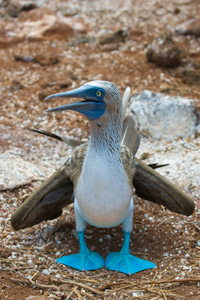 The blue-footed booby is so secure in its safety that it lays its eggs on the ground.
­iStockphoto.com/javarman3

­Due to the islands' isolation, and depending on their wind and elevation, there are four main ecosystems across the archipelago:

There are more than 500 plant species found on the Galapagos, about one-third of which are endemic, meaning they're native to the islands and found nowhere else in the world. Exclusive species of cotton, guava, passion flower, pepper and tomatoes all grow here.

While explorers and sailors left behind some animal inhabitants, such as goats and pigs, much of the wildlife on the islands are endemic species, some exclusive to certain islands in the archipelago. Many are fearless from living without predators. The blue-footed booby is one example: These birds have stopped nest building in their isolated habitat and lay eggs directly on the ground.

The Galapagos Islands are important because of these endemic species -- there are roughly 9,000 species living on the islands and in surrounding waters. Fourteen distinct subspecies of giant tortoise live on the islands, for example, as well as the only tropical-dwelling penguins. There are several reptile species including land and marine iguanas (marine iguanas are the only lizard known to swim in the ocean), lava lizards, geckos and snakes, 1,600 species of insects and 400 species of fish.

­Competing with the giant tortoises for most famous species on the islands are the 13 species of finches, known as Darwin's finches because they provided evidence for his theory of evolution by natural selection. These finches are an example of what's called adaptive radiation, the process of rapid speciation of a single species. Darwin's finches began as a single species of finch when they arrived on the islands, but through mutation and natural selection, they evolved into different species with different beak shapes -- giving each an advantage in the specific island habitats.