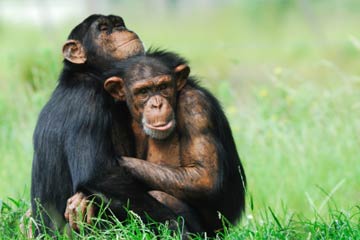 Scientists speculated in the 1970s that chimps share almost 99 percent of our genetic makeup. It was a good guess -- research in the following decades proved them right. Humans do, after all, have a lot in common with other animal species. We feel pain, and if you've ever watched a cat attempt to jump onto a hot stove and quickly retreat, you'll have decided that felines do, too. We have emotions, and as any dog-owner can tell you, their canine friends exhibit joyful, affectionate and even depressed behavior. And if you observe a chimp -- a species believed by many to share a common ancestor with humans -- you'll see many traits and behaviors that seem far more human than animalistic.

So what makes up that tiny, 1 percent difference between humans and chimps?

At the genetic level, DNA comparisons reveal certain alterations -- a slightly mutated gene here, a different protein there. These deviations show us why human jaws are smaller than those of chimps, and why we're more, or less, susceptible to certain diseases. Though the genes are remarkably similar, their expression isn't. Think of it this way: Sand and water can be combined to make either glass or just wet sand.

But does evolutionary progress explain religion, art, literature or moral decision-making? On the cognitive level, humans are vastly different from most species. We have self-awareness, spiritual curiosity and philosophical musings. We possess the capacity for mathematics, language, invention, mechanical adaptation and music. Chimps form communities, but there's a wide gulf between that community and human culture. And while chimps show self-awareness by recognizing themselves in mirrors, there's not yet any proof that this self-awareness leads them to ponder the greater mysteries of the universe (which, in their case, could be prompted by the question, "What makes chimps chimps?") These collective differences seem to make up the human "soul," and what makes humans human.

What exactly defines and constitutes the soul is a question philosophers have pondered since ancient times. By the time of Socrates' death in the fifth century, the term "soul" was used in much the same way it's used today -- as not only that which differentiates the living from the dead, but as something responsible for our sense of justice, foresight, introspection and our various emotional states. Interestingly, some branches of philosophical thought around the fifth and sixth centuries maintained that animals and plants had souls as well, and some philosophers -- such as Empedocles, Anaxagoras and Democritus -- didn't differentiate between animals and plants, because both were alive [source: Lorenz].

Regardless, our thoughts seem much more complex than those of other species. It could be argued that this is because we are Chimp 2.0 -- a better version of a base model. The other argument is that we've become something entirely different, due perhaps to an evolutionary mix-up or even a higher power.

Plants Evolve Scents and Colors to Attract Animals for Seed Dispersal
Is Knowing Your Full Genome a Right or a Privilege?
Is It Time for Our Understanding of Evolution to Evolve?