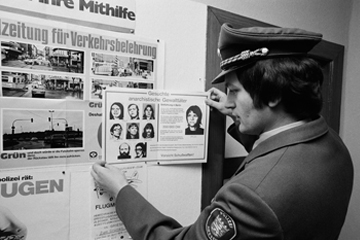 West German police search for nine members of the Red Army Faction (also known as the Baader-Meinhof Group) in 1976. The terrorist group unwittingly gave its name to the phenomenon of a thing you've just noticed or experienced suddenly cropping up constantly
© Regis Bossu/Sygma/Corbis

Let's pretend you have, oh, $40,000 to spare, and you're out shopping for a shiny new ride. You've never really cared about cars that much before, minus perhaps a cerebral hate for the car commercials you see every seven seconds during a televised sporting event. But now, you're invested. And when someone mentions a certain kind of car -- one you've never heard of before, but maybe gets high ratings on a consumer review site -- you're interested.

Suddenly, the car is everywhere. It's parked in front of your house. Your boss's husband has one. You see two of them next to you in traffic on your way home from work. The car is even popping up in those ubiquitous commercials during the baseball game, and you swear up and down they came out of nowhere. So what exactly is happening here? Did this car suddenly come to dominate the cultural consciousness? Or is your consciousness playing tricks on you?

Welcome to the Baader-Meinhof phenomenon, otherwise known as frequency illusion or recency illusion. This phenomenon occurs when the thing you've just noticed, experienced or been told about suddenly crops up constantly. It gives you the feeling that out of nowhere, pretty much everyone and their cousin are talking about the subject -- or that it is swiftly surrounding you. And you're not crazy; you are totally seeing it more. But the thing is, of course, that's because you're noticing it more [source: Zwicky].

A couple of things happen when the Baader-Meinhof (pronounced badder mainhoff) phenomenon kicks in. One, your brain seems to be excited by the fact that you've learned something new, and selective attention occurs. Your brain subconsciously thinks, "Hey, that's awesome! I'm going to look for that thing without actually thinking about it." So now that you're looking for it, you find it. To make it all the more powerful, confirmation bias occurs after seeing it even once or twice. In other words, you start agreeing with yourself that, yup, you're definitely seeing it more [source: Pacific Standard].

Now if you've done a cursory search for Baader-Meinhof, you might be a little confused, because the phenomenon isn't named for the linguist that researched it, or anything sensible like that. Instead, it's named for a militant West German terrorist group, active in the 1970s. The St. Paul Minnesota Pioneer Press online commenting board was the unlikely source of the name. In 1994, a commenter dubbed the frequency illusion "the Baader-Meinhof phenomenon" after randomly hearing two references to Baader-Meinhof within 24 hours. The phenomenon has nothing to do with the gang, in other words. But don't be surprised if the name starts popping up everywhere you turn [sources: BBC, Pacific Standard].