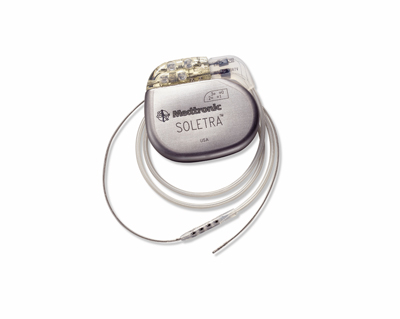 An implantable deep brain stimulation (DBS) device is made up of three main parts: the electrode, the pulse generator and the extension. Here's what each part of the device is designed to do:

The pulse generator (also called the stimulator) is a small, box-shaped device that generates the electrical signals that are sent to the electrode. The pulse generator is usually implanted under the skin in a space near the patient's chest. It includes a battery with a lifespan that ranges anywhere from two to seven years. The electrical patterns are generated in quick on-off pulses delivered at very high frequencies -- usually over 100 times per second. Only at these high frequencies does the stimulation help reduce the unwanted symptoms.

The last component of an implanted DBS device is the extension, which is simply an insulated cable that carries the electrical signals from the pulse generator to the electrode implanted in the brain. Having any part of the DBS device go through the skin would create a risk of infection, so the surgeon typically tunnels a small path under the skin from the pulse generator to the electrode.

Patients are typically given a handheld device that uses a magnet to communicate through their skin to the pulse generator. This allows the patient to control the dosages of electrical stimulation he or she receives. A doctor sets the range of stimulation dosages within certain limits, but the patient actually does the fine-tuning of the device based on his or her own individual needs.

Now that you know what parts make up a DBS device, let's find out how it produces the desired effect.

Who Benefits from DBS?

According to The Cleveland Clinic, patients diagnosed with a movement disorder are not automatically eligible for deep brain stimulation surgery. So who is a candidate? Any patient who: