Is funny beyond the bounds of science? 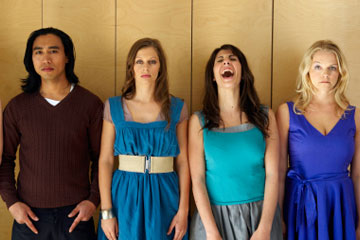 To each her own ... punch line.
Lifesize/Getty Images

Gender differences in laughter behavior and humor are just one of the myriad ways in which funny is a subjective concept. Statistically, men tend to get the most laughs, whether they're swapping stories with the guys or holding court with  women. In fact, women attempting to make men laugh have the toughest task, since a male speaker tends to provoke 126 percent more yucks out of a male audience, compared to a female speaker [source: Provine]. Although Christopher Hitchens famously explained away this comedy conundrum in "Vanity Fair" when he wrote that women simply aren't funny, surely the social role of laughter, which traces back to our primate ancestors, is more nuanced than that [source: Hitchens].

Regardless of gender, the pleasurable experience we derive from humor relies heavily -- to the point of dependency -- on context. Just think about getting tickled by a best friend versus a stranger. The identity of the tickler determines whether the experience is pleasurable or painful for the one being tickled [source: Provine]. That notion of relationship -- in terms of personal identity, age, language, ethnicity and social background -- can further impact what an audience finds funny. Americans tend to laugh more at "positive humor," characterized by irony, while Britons belly laugh at "negative humor," revolving around self-deprecation and sarcasm [source: Bloxham]. Which is the funnier nation? It's anybody's guess.

Recent research has also taken a poke at Plato and Aristotle's superiority theory of humor. While the ancient Greeks claimed that people laugh with malice at others' misfortune, studies show there may be other motivations behind our mirth. For example, lower status employees chortle more in response to managers. In one study, participants pretending to be bosses in a work environment laughed less at a corny joke set up by the researchers, compared to when they role played as lower-level employees interacting with fictional employers [source: Tierney]. This suggests we might fake funny in order to curry favor from people with a higher status.

Some of the most compelling evidence against the chances of unearthing a long-sought formula for funny is that most of the time, when people laugh in their daily lives, it isn't at jokes or comedy routines. When humor expert Jim Holt examined what we find funniest, he found that only 11 percent traces back to actual jokes or comedic routines [source: Beard]. Instead, the primary humor sources that account for a whopping 72 percent of our daily laughter are ourselves and the folks around us. Like many seasoned, successful stand-ups report: Everything is comedic material.