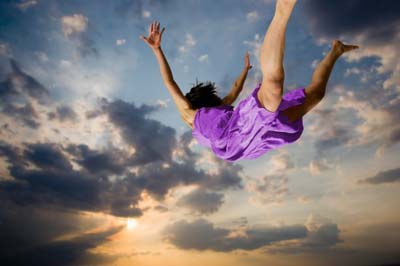 If you could fly, where would you go? Many lucid dreamers report dreams of flight.
John Lund/Blend Images/Getty Images

If you could control your dreams, what would you do? Grow wings and fly, talk to God, travel to ancient Rome, dine with Marilyn Monroe, open opera season at the Met? Instead, we dream of showing up naked at work or falling or getting lost. But there's one type that offers the promise of control: lucid dreams.

When you dream, you generally don't know you're dreaming. The events of a dream feel real, regardless of how fantastic they may be. You awaken and wonder how those ideas even came to be inside your head. What do they mean?

In a lucid dream, you're aware that you're dreaming. There's a moment of clarity where you realize that you don't, in fact, have wings, and that you can't possibly be having dinner with Marilyn Monroe, because she's dead.

Lucid dreaming is somewhat controversial because it sounds "New Age-y," like reading crystals or undergoing color light therapy -- things not everyone believes in. There's science behind lucid dreaming, though. One study monitored subjects with electroencephalograms (EEGs -- a test of the electrical brain activity) as they slept. The participants motioned with their eyelids when they were in the middle of a lucid dream. The EEGs confirmed that they were in REM sleep while they signaled their lucid dream state [source: LaBerge]. The fact that people can have lucid dreams isn't under dispute. The question is whether or not people can control their dreams. Some scientists claim an enthusiastic yes, while others dismiss it as nonsense.

So how does it work? In this article, we're going to investigate lucid dreams. We'll explore both the science and the fantastic, and we'll find out how to put you in control. 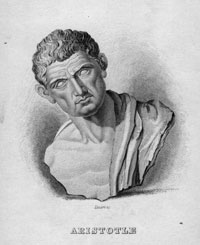 Dreams have been of paramount importance to cultures throughout the ages. Native Americans viewed dreams as portals to the spirit world, paths to prophecy and quests. The Aborigines refer to the stories of the world's very beginning as their dreamings.

Lucid dreaming isn't new, either. Aristotle may have been the first to write about lucid dreaming, although he didn't have a term for it. And some Tibetan Buddhists have been practicing something like lucid dreaming for a very long time: dream yoga.

The objective of dream yoga is to probe your consciousness and bring you to a constant state of awareness. A big part of the belief system of Buddhism is recognizing the world for what it is, free from illusion. A lucid dreamer recognizes the dream world for what it is -- a dream. As you're dreaming, you follow along the winding pathways of your own mind, making discoveries about the way you think and the obstacles your mind puts in the way of achieving clarity. Mystics have their own name for this altered state of consciousness: nondual awareness.

Yoga can bring about a new kind of awareness.
Ken Chernus/Taxi/Getty Images

Nowadays, many people have heard of lucid dreaming because of a man named Stephen Laberge, a psychophysiologist with a Stanford degree who heads up the Lucidity Institute, which is dedicated to the study of lucid dreams and their application to daily life. LaBerge calls himself a dream sailor. He runs workshops that aren't cheap (upward of a few grand) to teach people how to have lucid dreams. He claims that lucid dreams can do everything from making you more creative to helping with grief.

So what's it like to have a lucid dream? If lucid dreaming occurs when we're asleep, how could we possibly know we're dreaming? Read on to find out some theories about lucid dreaming. 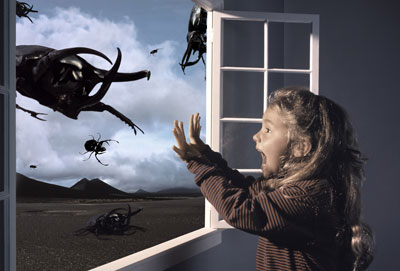 What's a lucid dream like? Think of your normal dreams, the bizarre plots and non-narrative structure that leaves you scrambling for words to try to explain it to a friend. Now put yourself back in the dream but imagine the details. You're flying through the air, but you can look at the clouds and the ground below, feel the wind whooshing against your skin, smell the clean air. And in the dream, you think, "I'm dreaming that I'm flying."

­Lucid dreaming occurs during REM sleep, the fifth sleep stage. The body is basically paralyzed, with the exception of the eyelids. In the experiment we mentioned before, subjects took advantage of this quality of REM sleep, using prearranged eyelid movements to signal that they were dreaming. Tiny movements from a test subject paired with an EEG to confirm the sleep stage are, so far, the only way that scientists have been able to study lucid dreamers.

We aren't sure what's going on in the brain during lucid dreaming. According to Dr. Matthew Walker, director of a sleep lab at Berkeley, the lateral prefrontal cortex, a part of the brain that deals with logic, may be responsible [source: The New York Times]. During REM sleep, this part of the brain is supposed to be "asleep," but it's possible that it "wakes up" so that dreaming and logic are both working at the same time, enabling the dreamer to recognize the dream situation for what it is.

The grand idea of lucid dreaming is all about control. In your dream, you could consciously decide to visit a specific place, say, Provence, France -- and your dream self would obey the waking mind. The possibility of controlling the mind even in sleep has led some researchers to consider lucid dreaming as a treatment for nightmares. One study showed that lucid dreaming exercises caused a group of chronic nightmare sufferers to have nightmares less often [source: Spoormaker and van den Bout]. The practical implications for dream control are enormous. People suffering from post-traumatic stress disorder or children plagued by bad dreams could be taught to salvage their sleep and get some rest. You could even take it a step further to a scarier conclusion -- think of the CIA's mind-control experiments with LSD and hypnosis. Imagine what kind of control a government may have if it could figure out how to manipulate the enemy's dreams.

The science community is divided on the subject of dream control. The majority of scientists say that it's not possible. But there are some scientists who argue that there's so much we don't know about the human mind that we can't make any conclusive judgments one way or the other.

So if you'd like to have a lucid dream, how could you do it?

Some researchers have suggested that out-of-body experiences (OBEs) are a type of lucid dream. During an out-of-body experience, a person sees his physical body as if he's located somewhere outside it. A person undergoing an operation might feel as if he's actually floating above his body and looking down on it. Scientists Lynne Levitan and Stephen LaBerge counter that OBEs are almost the opposite of a lucid dream -- lucid dreamers know they're in a dream, while people having an OBE think everything's real [source: Levitan and LaBerge].

How to Have a Lucid Dream 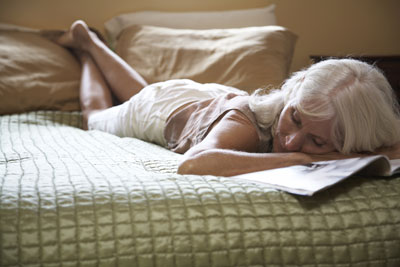 Who doesn't like a nap? Now you can call it your lucid dream research.
Rob Melnychuk/Digital Vision/Getty Images

If you'd really like to try to have a lucid dream, there are different suggested approaches. Dream recall is important. You may have heard of people keeping dream journals. As soon as you wake up from a dream, you record as many things as you can remember, even if you've woken up in the middle of the night. The idea is that by focusing on your dreams each day, you'll get into the habit of remembering them and start to see certain rhythms in how you dream -- once you're attuned to your process of dreaming, you'll become a better observer of your own dreams.

Mnemonic Induction of Lucid Dreaming (MILD) is one of LaBerge's techniques. When you wake up from a dream, try your best to remember it fully. When you go back to sleep, keep telling yourself that you're going to remember that you're dreaming during your next dream. The next step is to picture yourself back in the dream that you just had and look for a sign that the dream is a dream and not reality, like the fact that you're flying through the air with wings (LaBerge calls these dreamsigns). At this point, remind yourself that you're dreaming and continue the visualization. Keep doing this until you fall asleep.

Another method that might help involves napping. You wake up extra early, stay awake for a half hour or so, and then go back to sleep. Something about the interruption of sleep seems to blur the border between being asleep and being awake.

Reality testing, or reminding yourself throughout the day that you're conscious, is another approach. It also has connections to the Buddhist concept of mindfulness. This repeated acknowledgement of the state you're in is supposed to help you explore the other extreme -- the more you realize what consciousness is like and when you're conscious, the more likely you'll be to recognize when you're in a dream state. After all, how do you know you're conscious? Your actions have a logical reaction -- you flip on a light switch and the light turns on. When you flip the switch down, the light turns off. In dreams, actions don't tend to follow a logical pattern.

As far as gadgets go, the most notable might be the NovaDreamer, another Lucidity Institute innovation, which looks like a cross between a sleep mask and goggles. It's supposed to help you with lucid dreaming by letting you know when you're in REM sleep. Sensors track your eye movements and trigger a light that shines on your eyes. When you see the light in your dream, you'll know you're dreaming. LaBerge has also experimented with the use of galantamine, a drug sometimes used to treat Alzheimer's that's supposed to help the ability to think and remember.

For more information on lucid dreams, sleep and other cool stuff you might be interested in, try the next page.