Nostalgia and Your Brain 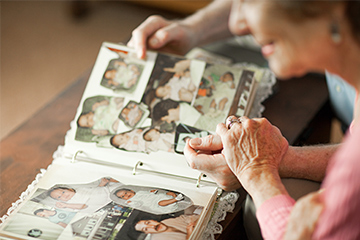 Nostalgia runs high in transitional age ranges: the teens through 20s and over 50 (from "middle-aged" to "senior").
Image Source/Getty Images

External triggers for nostalgia are easy to recognize. Looking at old pictures, reminiscing about old times or meeting up with a long-lost friend will all get you to wistful longing.

Less obvious, people seem prone to nostalgize when they're feeling cold [source: Zhou et al.]. We'll get back to that.

As far as sensory triggers go, music is powerful, and songs from adolescence and young adulthood are particularly so — a fact not lost on advertisers, who infuse commercials for everything from cars to yogurt with tracks that their target audiences grew up with [source: Elliot]. Experts theorize that music from this period of our lives is most strongly associated with emotional memories due to properties of the adolescent brain [source: Stern]. The neural activity activated by a song we like, which causes the release of "feel-good chemicals" like dopamine, is activated to a greater extent between the ages of 12 and 22. That extra-intense reaction becomes associated with the events and emotions going on while the song plays. And the emotions going on while the song plays are extra-intense, too, a result of all those "raging hormones" at work in the brain [source: Stern].

Not a lot is known about the brain's role in nostalgia, but it seems to involve connections between stored emotions and memories [source: Ostashevsy]. Researchers have connected music-triggered nostalgia with increased activity in the prefrontal cortex, which is activated when we retrieve autobiographical memories [source: Janata]. Tastes may induce nostalgia in part because the neural pathways carrying information from the taste buds ultimately lead in part to the limbic system [source: Murray]. Scent data lands there, too.

The limbic system, which includes the hippocampus and amygdala, plays a role in the processing and storage of memories (hippocampus), emotions (amygdala) and the "emotional memories" that result when a memory is stored during a highly emotional state [sources: Ostashevsy, Phelps, Levit]. Scent seems to elicit a stronger sense of nostalgia, as well as a more positive and emotional episode, than other triggers [source: Reid]. Might be because the olfactory bulb, which processes smell data from the nose, is right in the limbic system. It has direct links with the amygdala and the hippocampus [source: NBC]. Scents hardly have to travel at all to reach our stored emotional memories.