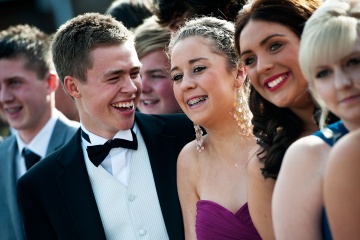 Remembering your prom glory days is OK once in a while. It might even make you happy.
Bethany Clarke/Getty Images

A visit to the cherished past, especially its idealized version, can offer a fresh perspective on the present. It can remind us we're not alone, that people love us, and that our lives have meaning.

In other words, nostalgia can make us feel better. And it usually does.

Nostalgia, then, can be a coping mechanism — a tool for picking us up when we're feeling lost, or bored, or lonely [sources: Routledge, Routledge].

Or cold. Nostalgia it seems, may have some evolutionary value.

That previously mentioned study linking nostalgia with cold temperatures? It found that chilly subjects were more likely to nostalgize than comfortable ones, yes; but it also found that when chilly people nostalgized, they perceived themselves or their environments as warmer. They also were less susceptible to the pain of extreme cold: When researchers had both nostalgic and non-nostalgic subjects hold their hands in 39 F (4 C) water until they couldn't take it anymore, the nostalgic subjects lasted longer [source: Zhou et al.]. It may just be that wistfully longing for the past helped our ancestors function more effectively in extreme winters [source: Zhou et al.].

It's not all warmth and mood lifts, of course. Nostalgia carries a sense of loss. It can sometimes lead to regret [source: University of Southampton]. But overall, it helps more than it hurts [source: Leibach].

Avoiding comparisons can help maintain that positive balance. A happiness competition between an idealized past and a non-idealized present will seldom turn out well for the present. And two or three episodes of nostalgia per week is plenty [source: Tierney]. Living in the past isn't good for anybody.

An occasional journey to summer camp, then — or senior prom, or the kids' table, or that first college road trip — is perfectly healthy. Heck, it's recommended.

Dwelling on the mysterious trigger that sends you there, possibly less so. (Seriously, what is that smell?) But such is life in the non-idealized present.

Health professionals do still talk about nostalgia in the context of mental illness, particularly depression. This is "pathological nostalgia." Longing for an idealized past can be harmful for people suffering neuroses like chronic worrying, in which nostalgia can trigger an irreconcilable, negative contrast between past and present that becomes a compulsive focus [source: Verplanken]. In conditions of pathological grief, nostalgia can become an obsession that replaces the normal grieving process [sources: Werman, Hirsch].

Dr. Alan R. Hirsch of the Smell and Taste Treatment and Research Foundation said this about nostalgia: "Nostalgia does not relate to a specific memory, but rather to an emotional state. This idealized emotional state is framed within a past era. Idealized past emotions become displaced onto inanimate objects, sounds, smells and tastes that were experienced concurrently with the emotions." This resonated strongly with me — that nostalgia is really a longing for an emotion, not an event.

It doesn't seem to be the prevailing view, though. So maybe nostalgia means different things to different people. Perhaps this is why, when my husband was helping me brainstorm nostalgia-inducing movies and TV shows for the "Looking for a Trigger?" sidebar, we often disagreed. I tended toward ones with the general theme of "coming of age," while his suggestions were more based on release date — which movies and shows were popular in different time periods. (He doubted millennials would experience nostalgia watching "Stand By Me," for example. I find it hard to believe any human could watch that movie without getting wistful for the journey that is adolescence.)

I looked far and wide to find another expert who so directly described nostalgia as a yearning for a specific past emotion more than a specific past event, but I came up short. So I shied away from focusing on that definition here. But just so you know, it's out there.