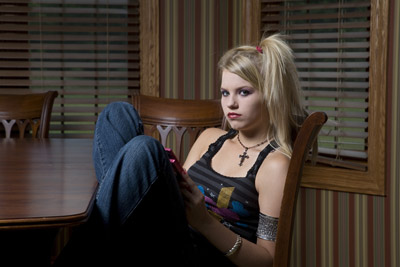 Wondering what happened to your little princess? Blame it on the brain.
Johannes Kroemer/Digital Vision/Getty Images

In adults, various parts of the brain work together to evaluate choices, make decisions and act accordingly in each situation. The teenage brain doesn't appear to work like this. For comparison's sake, think of the teenage brain as an entertainment center that hasn't been fully hooked up. There are loose wires, so that the speaker system isn't working with the DVD player, which in turn hasn't been formatted to work with the television yet. And to top it all off, the remote control hasn't even arrived!

The brain's remote control is the prefrontal cortex, a section of the brain that weighs outcomes, forms judgments and controls impulses and emotions. This section of the brain also helps people understand one another. If you were to walk into a sports bar full of Lakers fans wearing a Celtics jersey, your prefrontal cortex would immediately begin firing in warning; those teams are bitter enemies, and it might serve you to change your behavior (and your clothes). The prefrontal cortex communicates with the other sections of the brain through connections called synapses. These are like the wires of the entertainment system.

What scientists have found is that teenagers experience a wealth of growth in synapses during adolescence. But if you've ever hooked up an entertainment center, you know that more wires means more problems. You tend to keep the components you use the most, while getting rid of something superfluous, like an out-of-date laserdisc player. The brain works the same way, because it starts pruning away the synapses that it doesn't need in order to make the remaining ones much more efficient in communicating. In teenagers, it seems that this process starts in the back of the brain and moves forward, so that the prefrontal cortex, that vital center of control, is the last to be trimmed. As the connections are trimmed down, an insulating substance called myelin coats the synapses to protect them.

As such, the prefrontal cortex is a little immature in teenagers as compared to adults; it may not fully develop until your mid-20s [source: Kotulak]. And if you don't have a remote control to call the shots in the brain, using the other brain structures can become more difficult. Imaging studies have shown that most of the mental energy that teenagers use in making decisions is located in the back of the brain, whereas adults do most of their processing in the frontal lobe [source: Wallis]. When teenagers do use the frontal lobe, it seems they overdo it, calling upon much more of the brain to get the job done than adults would [source: Powell]. And because adults have already refined those communicating synapses, they can make decisions more quickly.

Adult brains are also better wired to notice errors in decision-making. While adults performed tasks that required the quick response of pushing buttons, their brains sent out a signal when a hasty mistake was made. Before 80 milliseconds had passed, adult brains had noticed the blunder, but teenage brains didn't notice any slip-up [source: Monastersky].

An area of the teenager's brain that is fairly well-developed early on, though, is the nucleus accumbens, or the area of the brain that seeks pleasure and reward. In imaging studies that compared brain activity when the subject received a small, medium or large reward, teenagers exhibited exaggerated responses to medium and large rewards compared to children and adults [source: Powell]. When presented with a small reward, the teenagers' brains hardly fired at all in comparison to adults and children.

So what does it mean to have an undeveloped prefrontal cortex in conjunction with a strong desire for reward? As it happens, this combination could explain a lot of stereotypical teenage behavior.