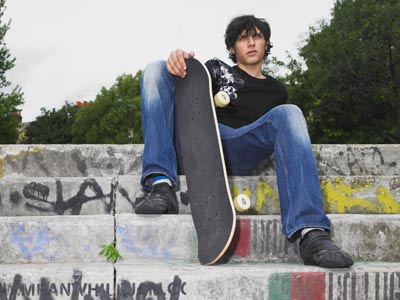 Hormones bear the brunt for much of what goes wrong in adolescence. Teenagers can seem like emotional time bombs, apt to explode at any minute into tears or rage. They engage in rebellious and risky behaviors, and it seems like they're always in trouble. But what these imaging studies show is that the brain may be behind much of this behavior.

First, let's consider the prefrontal cortex, particularly how it can aid people in understanding each other. We began this article with a song called "Parents Just Don't Understand," but as it turns out, teenagers don't understand well, either. While the Fresh Prince feels that his mother doesn't understand that the other kids will mock him for wearing outdated styles, he doesn't seem to fully listen when his mother explains her reasoning that school is not about showing off designer duds. Part of communicating with teenagers may require the insight that they're not necessarily hearing what you say.

­But it's the combination of that prefrontal cortex and a heightened need for reward that drives some of the most frustrating teenage behavior. For most adults, climbing hotel balconies or skateboarding off roofs of houses sound like awful ideas. Their prefrontal cortex curbs any impulse to do so, because the possible negative outcomes outweigh any potential thrill. But teenagers may try these things because they're seeking a buzz to satisfy that reward center, while their prefrontal cortex can't register all the risks these actions entail.

This behavior is evident on a much smaller scale as well; when a teenager goes to the mall to watch a movie but comes back with an iPod, then the prefrontal cortex didn't curb the impulse buy. If a teenager spends an hour on the Internet instead of focusing on homework, it's because the teenage brain doesn't register delayed gratification. Even though the teenager can vaguely register that there will be parental punishment later on, the appeal of fun now is too strong.

To some extent, risk taking may be an evolutionary necessity; otherwise, the teenager would spend his whole life in the basement listening to whatever noise those crazy kids call music these days. To leave the nest, you have to get comfortable taking a few chances. But not being able to reign in thrill-seeking impulses can have devastating effects, particularly when alcohol, nicotine and drugs enter the picture. This is also around the time when teenagers get behind the wheel of a car for the first time, as well as when they might be engaging in sexual behaviors.

Studies have shown that teenagers are more likely to become addicted to alcohol and drugs [source: Hotz]. In that developing prefrontal cortex, synapses are selected based on whether they're used or not, so behaviors that shape the brain are more likely to be maintained if started at this age. The brain is acting a bit like a sponge; it can soak up new information and change to make room for it, a concept known as plasticity.

But the teenage years don't have to be all doom and gloom -- plasticity can also help teens pick up new skills. The teen years may be the time when potential poets start scribbling furiously in notebooks and future hoops heroes start really hitting their shots. Before the brain is fully molded is a great time to take up the guitar or learn a new language. Not that teenagers will listen if you tell them this. But just knowing that the teenage brain needs more time and experience to develop may help both parent and child survive adolescence. After all, the Fresh Prince seems to be doing pretty well these days.

Not everyone believes the teenage brain is different. One psychologist claims that this argument is extremely American-focused, and other cultures don't associate adolescence with a period of extreme angst [source: Sabbagh]. This suggests that teenage torment is a social influence. In other cultures, though, teenagers spend more time with adults, so they may have more opportunities to learn how to make thoughtful decisions.